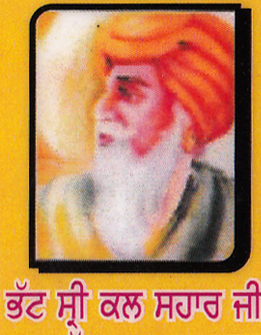 Kalshar who is also known as Kalh and Talh was the leader of the group of the Bhatts who had come to the congregation of Guru Arjun Dev. Taking into consideration the total contribution of Swaiyas by the Bhatts, which is 123, Bhatt Kalshar alone has contributed 54 Swaiyas which is a onsiderable share. A detailed account of his Swaiyas, eulogising various Gurus is as follows

SWAIYAS WRITTEN IN PRAISE OF

Nanak enjoyed the Rajyog as in -his heart dwelt the Peerless Lord.

He saved the whole world, dwelling upon His Name alone.

Sanak and Janak sung his praises, coyntless did alike, throughout ages,

Blessed is Guru Nanak, who took Avtar in human form, and came to earth.

Says Kal the poet, "His victory was hailed all over the earth"

And it echoed in the underworld as well.

O, Guru Nanak! You are blessed by the Lord, as He lovingly, dwells in you.(6)

During Satyug, you enjoyed the state of Rajyog,

When you overpowered Bali by becoming a dwarf,

During Duapar Yug you were known as Krishna who liberated Kansa

You granted the kingdom to Ugrasena and blest your lovers with fearlessness.

During Kalyug you were called Nanak, Angad and Amardas,

Everlasting and static is your rule,

As this is the will of the Eternal Lord.