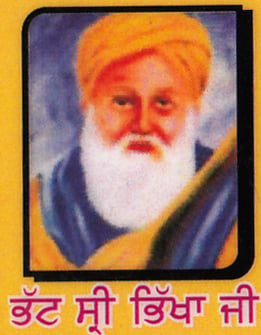 Bhika (pronounced Bhikkha) Bhatt, a Brahman bard of Sultanpur Lodhi in presentday Kapurthala district of the Punjab, became a Sikh receiving the rites of initiation at the hands of Guru Amar Das. He lived up to the time of Guru Arjan to whom he introduced sixteen other Brahman minstrels from his community.

They sang in his presence praises to God and the Gurus. Some of their compositions were included by Guru Arjan in the Guru Granth Sahib. One of the two stanzas by Bhikha recounts his wanderings in search of a true saint ending with his ultimate success by the grace of God. "Lord," sang the bard, "hath caused me to meet the Guru; as thou willest for me so must I receive O God!"

I wandered all over the place
Searching for a hermit with heavenly Grace.
I met many a mendicant, high flying on the ego fleet
Soft-spoken, polished, vainful and sweet.
In vain I wasted all my time, None of them was spiritually
fine. Like an empty vessal or hollow pot,
They talked a lot, all but rot.
God in their hands was just a pawn Shady deals were in their clan.
At last I reached the rightful place,
With Thee Guru Amardas I found solace.