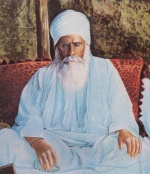 He was a saintly person who attracted a considerable following during his lifetime. Being completely honest at work, with a extremely courteous manner, never telling a lie, he had an unmoveable faith in the Sikh Gurus.

At the age of five, he was discovered sitting cross-legged in deep meditation for several hours on a raised and narrow bricked edge of a well outside the village. (A little sleep could plunge the child deep into the well). Elderly people who spotted him found him in deep ecstasy and total absorption quickly lifted him up to a safe place.

When questioned why he selected that spot, he replied, "In the process of devotion and love of Sri Guru Nanak Sahib if sleep overpowers, it is then better to fall into the well and die rather than live a life otherwise [without the Guru's love and remembrance]". Such was the deep dedication and unfathomable faith of Babaji from an early age. .....More