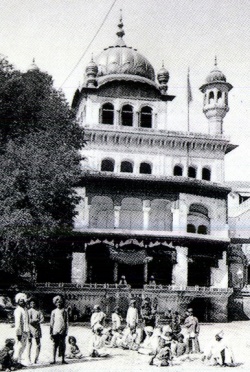 On June 1,1984, my brother Surinder and I were moved out of Punjab as the borders were being sealed and a curfew was declared in Punjab. Further, there was a news blackout. That only meant we had to infiltrate and see exactly what was going on.

So after two weeks, we set off in disguise. Upon approaching Amritsar, the truck we were riding in was waved to a stop and all of us were ordered out. I had already fastened my tape recorder with gaffer's tape to the small of my back. And I had tucked my 16mm Bolex camera into a filthy old jhola (cloth bag). When I raised my arms, a soldier patted me down but missed the tape recorder, and when he spun me around, I shifted the jhola quickly so he didn't see it under my shawl, and off we went to see what destruction Mrs. Gandhi had created.

Tanks and submachine guns and barbed wire greeted us at the Golden Temple. We circled around to the medieval streets in the back. Crooked winding lanes were dotted with Gurkha Regiment guards, imported because their foreignness would imply that they would not be taking sides in what was clearly the most traumatic event to have taken place in our lifetime in India.

"The police hacked off the arms of people and we collected their torsos in gunny sacks," said one of the residents who dared to greet us in the empty streets. He spoke in Punjabi, into my tape recorder. For half an hour, we interviewed him as he described the utter carnage of three days of gruesome battle that is now known with the rather beautiful name Operation Blue Star.

"Blood ran in the streets," he said. "Here." But we saw nothing, because the streets had been cleaned up by now, two weeks later.

A Gurkha guard came towards us, and we hid the tape recorder and moved on towards the Golden Temple.

There was a line of poor people, laborers. We joined the line. We entered from the southern gateway. Everything was absolutely quiet. We looked up and went into a sort of dreamstate or trance.

This could not be happening: the familiar minarets and many of the domes of the Golden Temple's sacred and historic buildings were completely destroyed. Pockmarks from submachine guns turned surviving edifices into shattered honeycombs, damaged beyond repair. 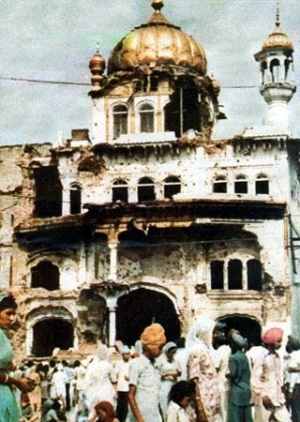 "The Akal Takht!", moaned Surinder. It was half-destroyed. How could this have happened? And why?

The Golden Temple and surrounding buildings were more important to the Sikhs, than the Al Aqsa Mosque or the Kabaa to Muslims, or the Wailing Wall to Jews, or St. Peter's to Catholics. And here it was, mostly destroyed.

The line moved. Soon we emerged into the encircling walkway known as the parikarma. Perhaps a hundred people from the line were carrying bricks, rebuilding the 16th century walls of marble, with crude replicas of white plaster.

With my Nikon, I quickly took a close-up showing the line between old and new: the old was marble inlayed with precious stones in the pattern of a flower. The new was whitewash with paint continuing the flower's leaves. Whoever was in charge, was literally whitewashing over history.

There was no noise amongst the workers. It was as quiet as a church. Perhaps Dresden felt like this after the Allied bombings of civilians.

I cranked up my spring-wound Bolex and tested it while it was still in my jhola. Immediately, its echo seemed to fill the entire parikarma! Two guards with rifles glanced over at us and started walking and motioning. "Hey, come here!" they said. We pretended not to hear, and headed for the main gate.

We managed to get out of there quickly, descending the main stairs, only to see that our exit from the compound itself was completely blocked. Of course it was.

We were on the inside, this time, of the rows of barbed wire and the tanks and submachine guns. We couldn't retreat back inside. We were trapped. This was serious business. There would be no calling our host, the head of the C.I.D. Nobody would have any patience with us, and if they suspected us of being foreigners, we would have to persuade them that we were not spies. Was it a good thing that we were carrying American passports, or a bad thing? We didn't want to find out, either way. 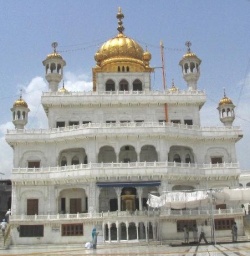 "Just keep walking," said Surinder. We noticed a spot where the barbed wire was spread just enough so one could hop across it safely. We'd seen a man doing it. We headed for that spot. Now two soldiers with submachine guns shouted "Hey, don't go over there. Come here!"

I felt like tiny jet rockets were attached to my ankles, pushing me to run. I had to force myself to walk calmly, pretending not to hear them. Soon a bullhorn came on. "Stop, stop! Come here!"

We lifted our hands up and turned to face our executioners. We walked slowly towards them. "Don't shoot, don't shoot!" we said in Punjabi.

But they were not Punjabis. They too were Gurkhas. They didn't understand a word of Punjabi.

As we got closer, we saw flashes of anger in their eyes. An officer approached. "What are you DOING?! You'll get ripped to shreds in that barbed wire! Please use this passage if you would like to exit, sir."

News Blackout to hide the truth

Two weeks later, full color pictures of the destruction would appear in India - taken by another infiltrator, the great photographer Raghu Rai.

Twenty years later, Raghu told me he'd hidden his Nikon in a row of flowers that he'd set onto a platform with candles and incense. He and his assistants carried it in over their heads, right past the machine guns, claiming to be paying their respects. His crystal clear color photographs were flashed all over the world, showing for the first, and only, time, complete views from all angles of the true horror of Indira Gandhi's crimes. What a brilliant, important, and gutsy thing he did.

Reasonable people everywhere were convulsed with horror and grief. The Golden Temple itself seemed relatively untouched, but half of the surrounded buildings, including the great Sikh Reference Library, were completely leveled. How would Sikhs react? What was going on? Why had Mrs. Gandhi done this?