We produce hereunder the text of a historical letter - the original is shown in facsimile on the right - which was sent by Sardar Gurcharan Singh Tohra, the then President of the Shrimoni Gurdwara Prabandhak Committee [S.G.P.C.], Amritsar, Punjab, to Indira Gandhi, Prime Minister of India, on June 2, 1984 - the day after the assault on the Golden Temple complex by the Indian military forces began. The attack continued for several days, resulting in, inter alia, the destruction of the Akal Takht, the looting and destruction of the historic Sikh Reference Library by the military, the looting of the Toshakhana (the treasury housing Sikhdom's priceless historical treasures), and the massacre of several thousand innocent pilgrims - men, women and children.

It is with a sense of extreme pain and regrets that I wish to draw your attention to the most brutal, most savage and most monstrous manner in which the relentless and senseless campaign of repression and oppression has been going on against the Sikhs for the last about two years now. 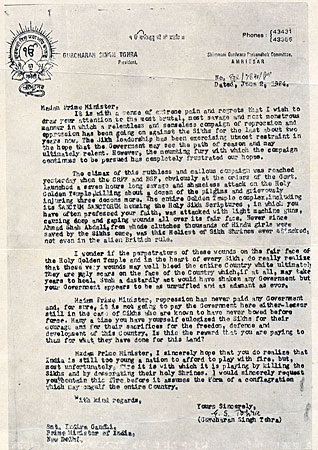 The Sikh leadership has been exercising restraint in the hope that the government may see the path of reason and ultimately relent. However the mounting fury with which the campaign continues to be pursued has completely frustrated our hopes.

The climax of this ruthless and callous campaign reached yesterday when the CRPF and BSF, obviously at the orders of the Govt., launched a seven hours long savage and shameless attack on the holy Golden Temple, killing about a dozen of the pilgrims and grievously injuring three dozens more. The entire Golden Temple complex including the SANCTUM SANCTORUM housing the holy Sikh scriptures, in which you have often professed your faith, was attacked with light machine guns, causing deep and gaping wounds all over its fair face. Never since Ahmed Shah Abdali from whose clutches thousands of Hindu girls were saved by the Sikhs, was this holiest of Sikh shrines ever attacked, not even in the alien British rule.

I wonder if the perpetrators of these wounds on the fair face of the holy Golden Temple and in the heart of every Sikh, do really realize that these very wounds may well bleed the entire country white ultimately. They are ugly scars on the face of the country, which if at all, may take years to heal. Such a dastardly act would have shaken any government but your government appears to be as unruffled and as adamant as ever.

Madam Prime Minister, repression has never paid any government and, for sure, it is not going to pay the government here either, lesser still in the case of Sikhs who are known to have never bowed before force. Many times you have yourself eulogized the Sikhs for their courage and for their sacrifices for the freedom, defense and development of this country. Is this the reward that you are paying to them for what they have done for this land ?

Madam Prime Minister, I sincerely hope that you do realize that India is still too young a nation to afford to play with fore, but, most unfortunately, fire it is with which it is playing by killing the Sikhs, and by desecrating their holy shrines. I would sincerely request you to contain this fire before it assumes the form of a conflagration which may engulf the entire country.