Battles of the Khalistan Movement, A continuing Series 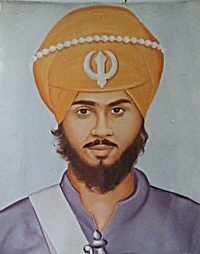 On Monday May 10, 1987, Bhai Gurpal Singh had found out that another prominent Singh in the Movement, Bhai Jarnail Singh Halwara, the assassin of Harchand Singh Longowal, had cut his kesh in order to conceal his identity. Bhai Sahib was firmly against compromising Sikhi to save one’s life. He decided he would go meet with Bhai Jarnail Singh and encourage him to keep his kesh again and get peshed at the next possible amrit sinchaar. Even in the thick of battle, with the Indian Security Forces hot on his trail, Bhai Gurpal Singh was willing to take a risk to help a fallen brother on the Path of Sikhi. 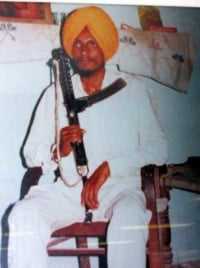 Bhai Gurpal Singh and another Singh met Bhai Jarnail Singh at village Haripur in Sangrur. They had a long discussion and decided to spend the night at a small hut in the fields. Somehow the Security Forces received word that these most wanted Singhs were in the area. Bhai Gurpal Singh had risen for amrit vela when at 4am, the hut was surrounded. The two Singhs herd a scuffle outside and immediately knew what was happening, they locked the doors and took machine guns with them and made their way out the back door. There they were met with heavy resistance by the CRPF. The two Singhs fought like true Khalsa warriors and killed dozens of CRPF and policemen. Both Singhs suffered multiple bullet wounds and attained Shaheedee. Bhai Gurpal Singh took the bullets in his chest and did not run. When he fell, Guru Sahib did one final kirpa on his Shaheed: Bhai Gurpal Singh’s head rested on an elevated water canal. Even in death, Guru Sahib did not let his Singh’s head bow before the enemy. Bhai Gurpal Singh jee was only 19 years of age at the time of Shaheedee!