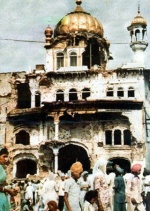 Operation Blue Star was the codename for the attack on the Akal Takhat and the Golden Temple complex during the period June 1 to 6, 1984. This tragic event took place over 25 years ago and Sikhs all over the world will remember this episode with great sadness.

The Indian army invaded the Harmandir sahib complex on the orders of the then Prime Minister of India, Indira Gandhi. At the time of the operation, close to 100,000 army troops had been deployed throughout Punjab.

A group of Sikhs, led by Jarnail Singh Bhindranwale (the charismatic leader of the Damdami Taksal) had, after being expelled from one of the Niwas (guest houses) moved into the Akal Takhat.

Besides the historic weapons carried by Sikhs, the kirpans and khandas, the group which had fortified the historic Takhat, with rifles, assault weapons & grenades, numbered no more than 250. The Golden Temple, the surrounding Bungas, guest houses and Langar were filled with 2,000 or more pilgrims, guests and employees of the complex. Many had come to visit the Temple on the day associated with the Martyrdom of Guru Arjan. .....More