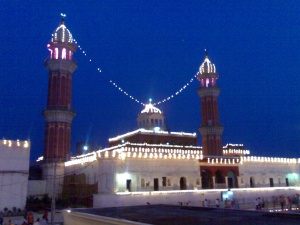 Bunga Ramgharhia with its twin towers. The Guru ka Langar looms above the rear of the Bunga in this photo.

The word bunga is derived from the Persian bungah meaning a hospice, or a dwelling place. In the Sikh tradition, the word specifically refers to the dwelling places and mansions which grew up around the Harimandar sahib at Amritsar and at other centres of Sikh pilgrimage. These were primarily the houses built by the conquering sardars and chiefs in Sikh times or by Sikh schoolmen and sectaries. Amritsar housed the largest complex of such buildings which like the Ramgharhia Bunga was built, as well, as a structure to house those warriors whose duties were to defend the Harmandar from attack.

All of the Amritsar bungas have not survived, but a fairly comprehensive list of them can be compiled from references in old chronicles, including contemporary Persian sources. Ahmad Shah Batalia wrote in his Persian work Twarikh-i-Hmdah 1233Bk (1817-18), that, around their place of worship amidst the sarovar at Amritsar, the Sikh sardars had erected many mansions which they called bungas.

The English adventurer Major H.M.L. Lawrence, who is said to have attained the rank of colonel in the service of Maharaja Ranjit Singh in May 1830, has recorded that there existed many bungas around the sacred tank at Amritsar. According to him, each misl had its own bunga, while some chiefs had built their personal bungas as well. The French scientist Victor Jacquemont and the British chronicler W.L. M' Gregor have also referred to these buildings though without using the word bunga.

Houses and hutments (temporary structures, often with a tent covering) had existed around the holy tank at Amritsar since the time of Guru Ram Das who had begun the excavation. But the premises remained deserted during periods of persecution in the eighteenth century. The Afghan invader, Ahmad Shah Durrani, demolished the holy Harimandar and its surroundings more than once during his inroads into India. The Sikhs returned each time to rebuild these and when they established their authority in the Punjab with the twelve misis or chiefships dividing the country among themselves, Amritsar became their political capital as well.

The sardars reconstructed the temple, cleansed the tank and raised fortifications for the security of the town. Some of them built their bungas on the periphery of the sacred pool. Special importance was attached to the Akal Takht, also called Takht Akal Bunga, established by Guru Hargobind himself in 1606 as the seat of highest religious authority for the Sikhs. At the Akal Bunga, the Sarbatt Khalsa, i.e. the general body of the Sikhs, met from time to time, especially on the occasions of Baisakhi and Divali, formulated policy and passed gurmatas or resolutions. It was at the Takht Akal Buriga that misis, lit. files, of the territorial acquisitions of each of the sardars were maintained.

The bungas could be broadly classified into three categories (i) those belonging to the different ruling clans, (ii) those belonging to individual sardars and chiefs, (iii) those belonging to different sects such as Udasis, Nirmalas, Sevapanthis and Akalis. Some of these lastnamed were centres of Sikh education and learning. There were bungas which became famous as seats of eminent poets and scholars. Bhai Kahn Singh of Nabha lists in his Guru Mahima Ratnavali names of a few men of letters who flourished in the bungas.

For instance, Sant Nihal Singh II, a reputed poet was the mahant, or custodian, of Sohalarivala Buriga. He was a pupil of Giani Ram Singh, and was the author of scholarly work Kavindra Prakash. His disciple Nihal Singh, who succeeded him as the mahant of Buriga Sohalarivala was himself a wellknown scholar. Bhai Sant Singh Giani of Buriga Gianiari was a renowned scholar and wrote a commentary in prose on Tuisi Das's Ramacharita Manasa. He enjoyed great esteem in the time of Maharaja Ranjit Singh and was appointed head priest of the Harimandar.

Santokh Singh, penname Tokh Hari, of Gharialvala Buriga, was a famous poet of his time and composed Guru Kabitva Manikya Manjusha. Buddh Singh, who has been referred to as a celebrated contemporary poet ofBraj Bhasha by Ganesh Das Badhera in his Persian work CharBaghiPanjab and who translated Ranch Tantra from the Sanskrit, was associated with Shahid Buriga. Ratan Singh Bharigu, the author of the Prachin Panth Prakash, composed his poeticized history of the Sikhs in the Buriga of Shyam Singh of Karorsirighia misl. The bungas belonging to the Nirmalas, Udasis, Sevapanthis, Gianis and Granthis also served as educational institutions.

The Udasi bungas belonging to Baba Pritam Das and Bhai Vasti Ram were famous centres of learning. Two bungas were engaged in teaching Sanskrit. They were Buriga Hukam Singh and Buriga Maikval. Hukam Singh Buriga was run by Agya Ram. The Maikval Buriga had a pathshala attached to it presided over by Braj Lal. Both the bungas were under the Udasis. Besides Sanskrit, they taught their pupils to read and write Gurmukhi. Some of the bungas were institutions of advanced studies and provided instruction in Vedanta, grammar and logic. One such bunga was that of the Malvais, which was built with the beneficence of the Sikh chiefs and sardars of the Malva region.

The Kapurthala Buriga served by Sant Chanda Singh and Sant Daya Singh specialized in the interpretation of the Guru Granth Sahib. Giani Sant Singh and Parduman Singh were also originally attached to this Buriga which claimed Mahari Kavi Bhai Santokh Singh as its most distinguished alumnus. Another old pupil was Bhai Ram Singh, who ran a Gurmukhi pathshala and was for some time a tutor to Kharak Singh, the eldest son of Maharaja Ranjit Singh.

The bungas of Ragi Kahn Singh, Ragi Charhat Singh and Ragi Dhanpat Singh trained pupils in Sikh music. The Ahluvalia Bunga was likewise an academy of music, with Raja Fateh Singh of Kapurthala as its chief patron. It excelled at instrumental music and was famous for its courses on Rabab, Sararigi, Mirdarig and Kachcchava which were normally played in the Harimandar.

The Bunga Singhpuriari imparted training in Gurmukhi calligraphy for transcribing copies of the Guru Granth Sahib. Two of its illuminaries, Bhai Lahora Singh and Bhai Hari Singh, were especially known for their mastery of the art. The chief patron of the Bunga was Giani Sant Singh, himself a fine calligraphist. Some of the deras, especially those belonging to Udasis, concentrated on indigenous medicine. Among these the Jallianvala Bunga was known for the treatment of skin diseases. Gharialvala Bunga was concerned with announcing the time of the day at regular intervals, principally for services in the Harimandar.

Each bunga was managed by a supervisor called a bungai. He daily recited the Guru Granth Sahib and looked after the comfort of the pilgrims. For maintenance, the bungas depended on the sects or individual sardars who had built them or who patronized them. Whenever Sikh chiefs visited the Harimandar to offer obeisance, they always left money and sweets to be distributed among the different bungas.

The sarbarah or manager of the Harimandar was in a position to issue instructions to the supervisors of the bungas about the management of their affairs, discipline, etc. On the enactment of the Sikh Gurdwaras Act in 1925, the bungas and their properties were added to the lists of the Shiromani Committee. But the owners of the bungas challenged this in the Gurdwara Tribunal. The Tribunal decided the case in their favour. An appeal against the decision of the Tribunal was lost in the Punjab High Court.

Lost due to reconstruction

In 1943, the Shiromani Gurdwara Parbandhak Committee decided to widen the parikrama, the circumambulatory terrace around the sarovar, for which many old bungas would have to be demolished. It therefore purchased the burigas which were not already the property of Darbar Sahib and demolished those which fell within the parikrama widening scheme. The actual work was, however, taken up and completed after the partition of Punjab (creation of India and Pakistan) in 1947. Now all buildings adjoining the parikrama, with the exception of Bunga Akhara Brahm Buta, are Gurdwara property.

The names of the founders and owners of the bung'as, the years of construction, details concerning the buildings, jagirs and properties attached and the names of the bungas are recorded in Tarikh-i-Amritsar ke Chand Makhaz and Report Sri Darbar Sahib. The former lists 72 bungas and the latter 73.

Below is given a list of 68 bungas and 12 akharas as recorded by Giani Gian Singh in Twarikh Sri Amritsar, written in 1946 Bk/AD 1889, First printed in AD 1923 and reprinted in 1977. Many of these buildings fell into disuse; most of the others were acquired by the Shiromani Gurdwara Parbandhak Committee and demolished to bring symmetry to the surroundings of the Harimandar Sahib.