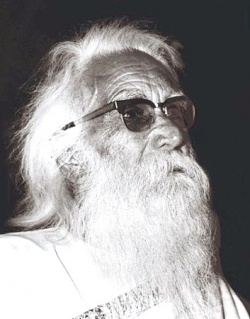 SOBHA SINGH (29 November 1901 - 21 August 1986), famous Sikh painter, well known especially for his portraits of the Sikh Gurus was born on 29 November 1901 in a Ramgarhia family of Sri Hargobindpur, in Gurdaspur district of the Punjab. His father, Deva Singh, had been in the Indian cavalry.

In 1905, when he was only 4 years old, his mother Bibi Acchran died and some 12 years later, when he was about 16, his father Sardar Deva Singh died in 1917. At the age of 15, Sobha Singh entered the Industrial School at Amritsar for a one year course in art and craft. It is said that in 1919 he was present in Jalianwala Bagh at the time of firing.

As a draughtsman in the Indian army he served in Baghdad, in Mesopotamia (now Iraq). On coming back from Baghdad, he married Inder Kaur. Whatever amount he had been sending to his sister from overseas, she had not saved anything out of it for him. They had a real hard beginning due to the stringency of money.

He left the army in 1923 to pursue an independent career in drawing and painting, initially in Amritsar at Bazar Mai Sewan. After a while, he moved his studio close to Jallianwala Bagh still remaining in Amritsar, Punjab. Nanak Singh, who became a well-known Punjabi writer and novelist, was his good friend. Sardar Gurbux Singh, editor Preet-Lari, a distinguished Punjabi writer, was their contemporary.

At Delhi, the artist had his studio in Connaught Place, New Delhi. At that time it was an isolated, calm and quiet place with small hills in the vicinity. Colonel Tait, an officer in the Railway Publicity Department, was an art lover, and he became a devoted friend of Bhai sahib.

The artist stayed at Delhi for twelve years, in the full bloom of his youth, and became a central figure in the social gatherings of importance.

Occasionally, he would sit at his easel even for 18 to 20 hours. He did the first painting of Sohani-Mahiwal at Delhi. It gave him an instant fame.

The skilled and dedicated painter 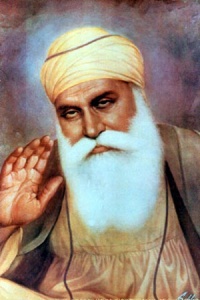 However, in 1949, he settled down in Andretta, a remote and picturesque village in the lap of Himalayas in the then little known place in the Kangra valley. Andretta is a village about 12 miles from Palampur, in the District Kangra, in Himachal Pradesh, India. It is located in the charming and picturesque Kangra Valley.

He had the desire to settle somewhere away from the rush of a town, in the solitude of nature. Nohra Richards, mother of the Punjabi drama, who lived at Andretta, became a deciding factor and Bhai sahib first went to this village in 1947, shortly after the partition of India.

This was the beginning of the most productive period of his life - During his 38 year stay at Andretta he produced hundreds of paintings.

Sobha Singh was skilled in the western classical technique of oil painting. His themes came from the romantic lore of the Punjab, Indian epics and from the Sikh religious tradition. His paintings of Punjabi lovers Sohni and Mahinval and Hir and Rahjha became very famous.

Sohni Mahinval was rated to be a real masterpiece; its impact upon the Punjabi consciousness was of a lasting nature. What gave Sobha Singh the utmost satisfaction was his paintings of the Gurus of the Sikh faith.

As he put it, "Painting the Gurus is nearest to the ultimate in the evolution of my real self". His earliest painting in the series was of the birth of Guru Nanak done in 1934. The child Nanak was depicted in Mata Tripta's lap, surrounded by his sister Nanaki and other women of the family, while Siva, Rama, Sita and the goddess Sarasvati appeared from out of the skies to shower flowers on the holy child.

The motif clearly bore the influence of Christian art of the middle ages. The earliest portrait of Guru Nanak by Sobha Singh captioned "Nam khumaii nanaka charhi rahe din rat" which roughly translates to "Nanak, May the intoxication of God's name, enrapture me day and night" was painted in 1937. The Guru is shown here with eyes lowered in a mystic trance.

Several later versions of Guru Nanak's portrait by him are preserved in the Chandigarh Museum. The portrait he made in honour of the 500th birth anniversary of Guru Nanak in 1969 won the widest vogue. 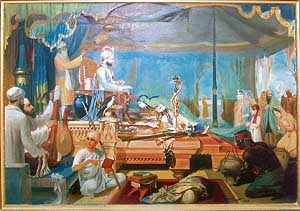 Likewise, he made a portrait of Guru Gobind Singh for his 300th birth anniversary in 1967 which also became very popular. Sobha Singh painted pictures of other Gurus as well Guru Amar Das, Guru Tegh Bahadar meditating in his basement chamber at Baba Bakala and Guru Har Krishan healing the sick in Delhi. Earlier in his career, he had attempted a painting depicting Queen NurJahan in the presence of Guru Hargobind, but its prints were sealed following a protest from the Muslims in 1935.

Among Sobha Singh's portraits of contemporary personalities that of Norah Richards, the matriarch of Punjabi theatre, was done with a rare delicacy and feeling.

Murals by him embellish the art gallery of Parliament House in New Delhi. The 30-feet panel depicting the evolution of Sikh history features Guru Nanak with Bala and Mardana on one side, and Guru Gobind Singh in meditation on the other.

Sobha Singh also tried his hand at sculpture, and did the busts of some eminent Punjabis such as M.S. Randhawa, Prithvi Raj Kapur and Nirmal Chandra. He left an incomplete head study of Armrita Pritam, the first most prominent woman Punjabi poetess and fiction writer. The originals of his works are displayed in his studio at Andretta. 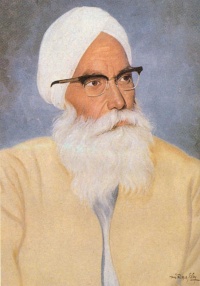 Numerous awards and distinctions were conferred on him, the prominent being the title of State Artist of the Punjab Government in 1974 and the Padma Shri of the Government of India in 1983. He was conferred upon the degree of Doctor of Literature (Honoris Causa) by Punjabi University, Patiala.

The Ministry of Information and Broadcasting released a documentary film titled Painter of the People based on his life and works. The British Broadcasting Corporation also made a documentary on him in 1984. Indian Government issued postal stamp in honor of Sir Sobha Singh in 2001.

The originals of his works are displayed in his studio at Andretta. Much acclaimed and honoured in his lifetime, Sobha Singh died in Chandigarh on 21 August 1986. 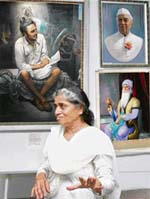 Carrying forward the legacy of her father, Gurcharan Kaur, daughter of renowned painter Sobha Singh, plans to set up a museum to preserve and showcase her father’s personal belongings within the complex of Sobha Singh Art Gallery at Andretta, 12 km from here.

She has not put up any request for the purpose before the state government for she plans to do it on her own. “I have several things that my father used which I have preserved. I want these items to be displayed there so that his admirers are able to take a peep into his life,” she explained.

Listing a few of these items, she said that she had her fathers’s camera, radio, pens, brushes, imported oil paint tubes and homeopathic medicines which were imported from Germany.

“My father was very fond of expensive perfumes and soaps. He would use these many times in a day,” she said pointing towards the half-used bottles of Brute perfume and an Imperial Leather soap that he used more than 30 years ago.

Out of the many other things preserved, she pointed out at a huge portrait of Guru Ravi Dass ji that lay close to his bed. “This is one incomplete painting that my father left in a stand here.”

She also revealed the other forte of the Padam Shree painter. “My father also made beautiful sculptures out of plaster of paris”, pointing towards his sculptures which included Sohni Mahiwal made out in a round plate, M.S. Randhawa, the first VC of the Punjab Agricultural University, and another one that he had titled “Devil and Angel” depicting the two faces of humanity.

Herself a painter, she also showed the portraits made by her father of Guru Nanak Dev ji, Guru Gobind Singh ji, Bhagat Singh, Jawahar Lal Nehru, Dr Rajendra Prasad and most distinguished one being of his own.