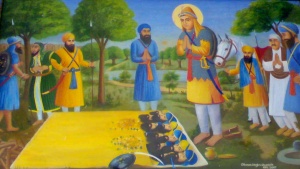 The Skirmish of Bassi Kalan (7 March 1703) was fought between Sahibzada Ajit Singh (the eldest son of Guru Gobind Singh), Bhai Udey Singh and a force of about 200 Singhs, against the soldiers of Zabar Khan about 10km from Hoshiarpur. Guru Gobind Singh ji had sent the Sikhs to the village to arrest Zabar Khan who had kidnapped the young Hindu bride of Devi Das, who had asked Guru Gobind Singh for help.

Hakim Jabar Khan (a Pathan) was the chieftain of the village of Bassi Kalan (31Â°32`N, 75Â°55`E) and 21 other Villages in Hoshiarpur District. Like many of the Muslim landowners, he used to torture the Hindus of the villages. Many Muslims (usually the Sunni Ghaznis and especially the Pathans) looked upon the Hindus who they called 'zimmis' (non-muslims) as less than human and often did with them as they wished. Khan would kidnap the local girls, and take them to his palace for indecent purposes. The honor of a young woman or even of a married woman (being a virgin or having relations with only her husband was (and still is) a very important thing in Punjab. Many women, both Hindu and Sikh preffered to kill themselves rather than face the shame of being raped. Khan would even have his men snatch the wedding doli of young hindu brides so he could rape them before their marriages were consummated.

His reputation for doing such evil was well known, as he had not limited his liberties to the brides, wives and daughters of Bassi Kalan.

Devi Das was a poor brahmin (Sarsoot) who belonged to Jaijon, a village near Hoshiarpur. Jabar Khan had forcibly kidnapped the newly wedded wife of Devi Das, just after the couples' wedding ceremony, and had taken her to his palace at Kalan. The Brahmin was sad and heart broken and wept before the Muslim qazis (judges) and other religious leaders, but nobody cared. During the rule of the Mughals, non-Muslims were not deemed to have any rights and their rights were abused extensively. 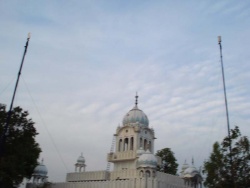 Gurdwara Sahahidan near harian vailan where some singhs were cremated

Finally in desperation, he went to the Darbar (Court) of Guru Gobind Singh ji at Anandpur Sahib and narrated his story to the Guru. After listening to the story the Guru ordered Baba Ajit Singh to arrest Zabar Khan and to return the wife of Devi Das to her husband. Guru Sahib told him that if the Pathans put up a fight, it would be proper to use their swords.

The Sahibzada and the Singhs were worried that they might get lost along the way as the area was grown over with bush and was in a dense jungle. So the Guru ji told him that one of the Sikh of the Guru, believed to be, Bhai Ratan Singh who was living at Bajrour, which is near the jungle area would assist them to find the location of the kidnappers. 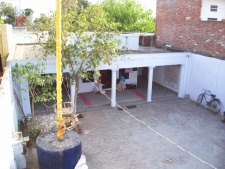 The Place Of Clash

Sahibzada Ajit Singh met Baba Ratan Singh who was staying in Bajraur. He was dweller of that area. He was very happy to see that Baba Ajit Singh had come and joined the Sahibzada and Singhs in making plans to surprise and capture Khan after dark, because at that time the Mughals would be easily surprised with their heads dizzy with Sharab and Shabab, lost in having a good time (wine, women, kababs and music). The Sahibzada's plan was to arrest Zabar khan and to send him to Anandpur. Hopefully the Mughals would be so drunk that killing might not be necessary, but they were prepared for the worst. 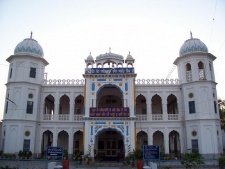 Sahibzada Ajit Singh attacked Bassi area where Hakam Jabar Khan was spending his evening time. Pathans were not ready with their arms at that time. There was a clash between both sides. Many Pathans were killed and many ran away.

After a long fight, Jabar Khan though wounded, was arrested and tied up. Baba Ajit Singh sent Pathan Zabar Khan and the wife of Devi Das to Anandpur with some Sikhs. Zabar khan was punished at Anandpur for his misdeeds.

On Monday evening they reached Ladhewal where Gurudwara Sahib was situated. Some of the Singhs died in the night as their condition was quite bad. So Sahibzada Ajit Singh ji himself did all the final rituals of these Singhs on Tuesday morning. After this he ordered the remaining Singhs to move to Anandpur Sahib.

This Gurudwara Sahib has been dedicated to the remembrance of Sahibzada Ajit Singh ji and the brave Singhs who died here. 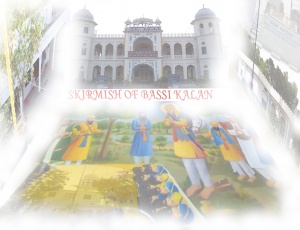