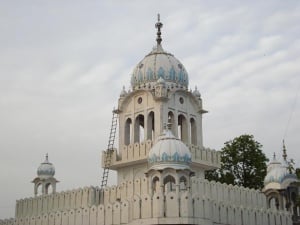 Gurdwara Shahidan (Harian Vailan) sacred place situated on the north side of the Gurdwara. At this place those Sikhs were cremated which got martyrdom during battle against Zabar Khan.

At this sacred place Sahibzada Ajit Singh, the oldest son (or sahibzada) of Guru Gobind Singh, arrived with 100 Singhs via Mahilpur, Shahidan Ladhewal and Chukhandi Sahib, Bajror in 1703 (1760 Bikrami). Sahibzada Ajit Singh came for a stay at this Gurdwara after securing the release of a Brahmin Paras Ram’s wife from the hands of Zabar Khan. Many Singhs got martyred after fighting with Zabar khan, whose cremation ceremony (antim sanskar) was done at Shahidan Gurdwara. This marble clad thara (platform) is situated on the right side of the entrance of the Gurdwara's main building, the Darbar Sahib. It has a blue coloured Nishan Sahib. Then they took Zabar Khan to Anandpur Sahib before Bharat Shah got order to dig a hole, put Zabar Khan in it and fire arrows. They did the same.