From SikhiWiki
Jump to navigationJump to search
Skirmish of Bassi Kalan 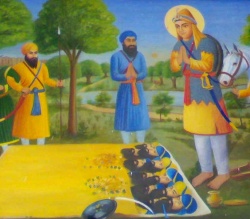 Hakim Jabar Khan (a Pathan) was the chieftain of the village of Bassi Kalan and 21 other Villages in Hoshiarpur District. He, like many of the Muslim landowners, used to torture the local Hindus living in the villages. Many Muslims (usually the Sunni Ghaznis and especially the Pathans) looked upon the Hindus who they called 'zimmis' (non-muslims) as less than human and often did with them as they wished. Khan would kidnap the local girls, and take them to his palace for indecent purposes.

The honor of a young woman or even of a married woman (being a virgin or having relations with only her husband was (and still is) a very important thing in Punjab. Many women, both Hindu and Sikh preffered to kill themselves rather than face the shame of being raped. Khan would even have his men snatch the wedding doli of young hindu brides so he could rape them before their marriages were consummated. .....More