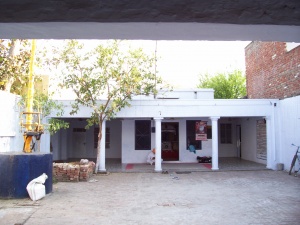 Gurdwara Sahibzada Ajit Singh is situated in village bassi kalan in the name of Baba Ajit Singh after the eldest son of Guru Gobind Singh, who, at his father`s bidding, came here on 7 March 1703 at the head of 100 horsemen and rescued a Brahman`s bride forcibly taken away by the village chief, Jabbar Khan. The lady was restored to her husband and Jabbar Khan suitably punished. A simple mud hut that existed here as a memorial was replaced in 1980 by the present building, a 4metre square room with a circumambulatory verandah around it, by SantJavala Singh, who still manages it.

On March 6,1701 Dewki Das, a Bralunin, visited Anandpur Sahib and made a petition to Guru Sahib to help him restore his wife whom Jabar Jang Khan, the chief of Bassi Kalan, had forcibly taken away. The next day Sahibzada Ajit Singh and Bhai Udey Singh led a group of about one hundred Sikks to the village of Bassi Kalan, arrested Jabar Jang Ktian and restored the wife of the Brahmin. A Gurdwara has been built to preserve memory of the event. Bassi Kalan is about 12 km from Hoshiarpur