From SikhiWiki
Jump to navigationJump to search
Article 1 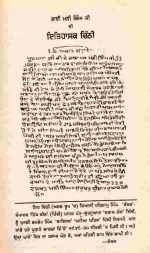 A copy of the original letter

The Dasam Granth contains 1428 pages and is the collection of the writings of the 10th Patshah, Sri Guru Gobind Singh Ji. It contains his Jaap Sahib, the Akal Ustat or praise of the Creator, the Vachitar Natak or Wonderful Drama, in which the Guru gives an account of his parentage, his divine mission, and the battles in which he had been engaged.

Then follow the Gyan Parbodh, or awakening of knowledge; Chobis Avatar - accounts of twenty-four incarnations of the Vishnu, according to the Hindus, and Brahrnavatar and Rudravtdr, selected because of their warlike character; the Shabad Hazare; quatrains called Sawaiyas, which are religious hymns in praise of God and reprobation of idolatry and hypocrisy; the Khalsa Mahima, or words in praise of the Khalsa; the Shastar Nam Mala, a list of offensive and defensive weapons used in the Guru's time, with special reference to the attributes of the Creator; the Tria Charitar, or tales illustrating the qualities, but principally the deceit of women; the Kabiovach Bainti Chaupai will "absolve the suffering, pain or fear of the person, who will even once recite this Bani"; the Zafarnama, containing the tenth Guru's epistle to the emporor Aurangzeb; and Hikayats, several metrical tales in the Persian language. 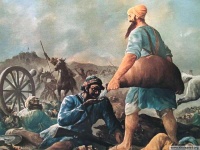 BHAI KANHAIYA (1648-1718), was a Sikh of Guru Tegh Bahadur and was the founder of the Sevapanthi or Addanshahi sect of the Sikhs. Bhai Sahib was born in a Dhamman Khatri family of Sodhara near Waxirabad in Sialkot district (now in Pakistan). His father was a wealthy trader, but he himself being of a religious bent of mind left home when still very young and roamed about with saddhus and ascetics in search of spiritual peace.

His quest ended as he met Guru Tegh Bahadur (1621-75) and accepted initiation at Guru Ji hands. Bhai Kanhaiya established a dharamsdhal at Kavha village in the present Attock district of Pakistan which he turned into a preaching centre. His special mission was selfless service of humanity with no distinction of nationality, caste or creed. In 1704/5, he was on a visit to Anandpur when Anandpur was invaded by a combination of hill troops and the imperial Mughal army. 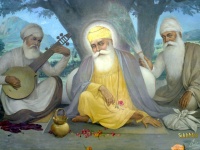 SHABHAD KIRTAN or GURMAT SANGEET has been an integral part of Sikh worship from the very beginning. Hymn-singing was in fact the earliest form of devotion for the Sikhs. Even in the time of Guru Nanak, the disciples assembled together to the shabads, i.e. hymns composed by the Guru and thus to render praise to the Lord. Kirtan has since been appropriated into the regular gurdwara service. But Sikh kirtan abstains from all outward expression or frenzy in the form of clapping and dancing. Praise is offered to the Supreme Being who is without form, nirankar and not to a deity in any embodiment or incarnation.

The texts of the shabad kirtan are those that comprise the Holy Book of Sikhs known as the Guru Granth Sahib, or Adi Granth, compiled by Guru Arjan in 1604. Probably no other religion shows a closer relationship between music and its scriptures than does Sikhism. The Holy Book is organized according to ragas, 31 in number, to which the poetic hymns belong. 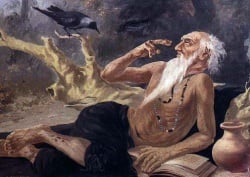 When Farid Ji was just a few years old, his mother taught him his prayers. The boy asked what was gained by his prayes. His mother replied 'sugar'. Accordingly, she used to hide some sugar under his prayer-carpet, and when he had finished his prayers, she would draw the mat forth, and give the sugar to Farid as a reward for his devotion. On one occasion, when his mother was absent, he prayed a great deal, and, it is said, a great supply of sugar - a miraculous gift from God - was found under his carpet. Some he ate himself and the rest he gave to his playfellows. He related the circumstance to his mother on her return. It was then his mother gave him the surname Shakar Ganj, meaning a "treasury of sugar".

There are 134 hymns of Farid incorporated in the Guru Granth Sahib. Many Sikh scholars ascribe them to Farid Shakarganj (1173 – 1265) of Pak Pattan, a disciple of the Sufi Qutbuddin Bakhtiyar Kaki. The tenth in succession to his post was Shaikh Brahm (Ibrahim), also known as Farid Sani or Farid the 2nd, and it is this Farid who Guru Nanak Dev ji met on two occasions.

Macualiffe states that hymns ascribed to Farid are compositions by the latter, whereas others ascribe them to Farid Shakarganj. There are others who believe that the hymns were composed by different Sufis of the Pak Pattan centre, all using the poetic name Farid. 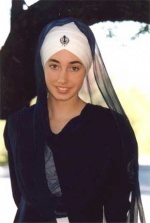 WOMEN IN SIKHISM: In Sikhism, the Sikh women are regarded as equal with men and have all the rights and privileges enjoyed by men. The woman is considered to have the same soul as man and has equal right to grow spiritually. The Sikh woman is allowed to lead religious congregations, to take part in Akhand Path (the continuous recitation of the Holy Scriptures), to perform Kirtan, to work as Granthi (priest) or a preacher and to participate freely in all religious, cultural, social, political and secular activities.

Sikh woman have played a glorious part in Sikh History and have proven themselves as equal in service, devotion, sacrifice and bravery. Examples of their moral dignity, service and self sacrifice are and will remain a source of inspiration. Women are the backbone of the history of the Sikhs, their culture and tradition yet there is little written about this huge contribution by the Sikh women to the great history of this religion.

Man and woman are two sides of the same coin - the human race. Man takes birth from a woman and woman is born of a man. This system is interrelating and inter-dependent. A man can never feel secure and complete in life without a woman. A man’s success depends upon the love and support of the woman who shares her life with him and vice versa. 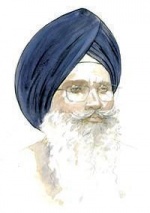 Sikh man with a Turban and uncut beard

Turban is closely associated with Sikhism. Sikhism is the only religion in the world in which wearing a turban is mandatory. Vast majority of people who wear turbans in the Western countries are Sikhs. The Sikh pagdi (ਪਗੜੀ) is also called dastaar (ਦਸਤਾਰ), which is a more respectful word in Punjabi for the turban.

Sikh's are famous for their distinctive turbans. The turban represents respectability, and is a sign of nobility. Guru Gobind Singh gave all of his Sikhs turbans to recognize the the high moral status that the Khalsa has to adhere to. A turbaned sikh stands out from the crowd and is easily recognizable. The dastaar, as the Sikh turban is commonly known as is an article of faith. This was made mandatory by the founders of Khalsa and all baptised Sikhs are required to wear a Dastaar. It is not to be regarded as mere cultural paraphernalia.

When a Sikh man or woman dons a turban, the turban ceases to be just a piece of cloth and becomes one and the same with the Sikh's head. The turban as well as the other articles of faith worn by Sikhs have an immense spiritual as well as temporal significance. The symbolisms of wearing a turban are many from it being regarded as a symbol of sovereignty, dedication, self-respect, courage and piety but the reason all practicing Sikhs wear the turban is just one - out of love and obedience of the wishes of the founders of their faith.

Vegetarianism: We should not increase our burden of karmas by eating higher life forms. There is karmic value in every kind of thing we use in this world. The air we consume, the water we use, we have to pay for. The light of the sun or moon is also not free...and this green grass is also to be paid for - nothing is free. Everything has a Karmic value. Depending on the "Jun" (life-form), there is a price to be paid. Lower life forms have a lower price to pay. Fruits and plants have a lower spiritual price than animal life forms. So why take the higher burden?

If you are to construct a house, you don't make it using gold or silver or jewels. If you can, you make the house of stone - Stone is very strong and cheap. So, why don't you make your house with stone and brick instead of gold?