The place Visited by Guru Nanak Dev during his udasis to south. Guru Nanak’s visit to that temple; and there was discourse between Guru Nanak and the Pundit of Omkar Temple and the bani is called Dakhni Oankar. 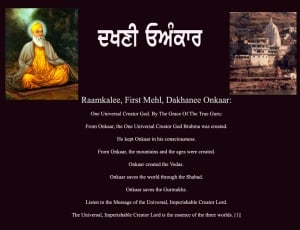 The island comprises two lofty hills and is divided by a valley in such a way that it appears in the shape of the sacred Hindu symbol 'Om' from above. Between the precipitous hills of the Vindhya on the North and the Satpura on the South, the Narmada forms a deep silent pool which in former times was full of alligators and fish, so tame as to take grain from human hand. This pool is 270 ft below the cantilever type bridge constructed in 1979. The bridge has enhanced the scenic beauty of the place, making it look exceedingly picturesque.

The temple stands on a one mile long, half mile wide island formed by the fork of the Narmada. The soft stone of which it was constructed has lent its pliable surface to a rare degree of detailed work, of which the frieze figures on the upper portion is the most striking. Also intricately carved is the stone roof of the temple. Encircling the shrine are verandahs with columns which are carved in circles, polygons and squares.

A fine example of early medieval Brahminic architecture. Its unique feature is a frieze of elephant carved upon a stone slab at its outer perimeter. 24 Avatars: A cluster of Hindu and Jain temples, remarkable for their skillful use of varied architectural models.