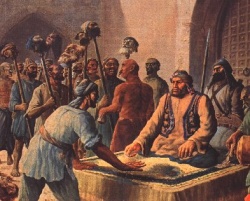 MUIN UL MULK (d. 1753), shortened to Mir Mannu, was the Mughal governor of the Punjab from April 1748 until his death in November 1753. He took over charge of the province after he had defeated the Afghan invader, Ahmad Shah Durrani, in the battle fought at Manupur, near Sirhind on 11 March 1748. In this battle his father, Wazir Qamar udDin, prime minister to the Mughal emperor of Delhi, was killed.

As governor of the Punjab, Mir Mannu proved a worse foe of the Sikhs than even his predecessors Abdul Samad Khan (1713 - 26), Zakariya Khan (1726 - 45) and Yahiya Khan (1745 - 47), and continued the witch hunt with much greater severity. According to Syad Muhammad Latif, the Muslim author of the "History of the Panjab", his first act was to storm the fortress of Ram Rauni, in Amritsar, where 500 Sikhs had taken shelter.

This drove the Sikhs to seek refuge in the mountains and jungles. Mannu issued orders to the hill chiefs to seize Sikhs and send them in irons to Lahore. Hundreds of Sikhs were thus brought daily to Lahore and executed at Nakhas, the horsemarket, present site of Gurdwara Shahid Ganj, outside of the Delhi Gate, within sight of crowds of spectators.

However, under the influence of his Hindu minister, Kaura Mall, who was a sympathizer of the Sikhs, but more because of the threat of another invasion by Ahmad Shah Durrani, Mannu was led temporarily to halt his campaign against the Sikhs and make peace with them by granting them a jagir of twelve villages from the areas of Patti and Jhabal yielding an annual revenue of about a lakh and a quarter rupees.

As Ahmad Shah Durrani entered the Punjab in December 1748, Mir Mannu, receiving no help from Delhi, agreed to make over to the invader all territory west of the Indus and the revenue of Char Mahal or the four districts of Sialkot, Aurangabad, Gujrat and Pasrur, assessed at 14 lakhs a year.

In 1750, Shah Nawaz Khan was appointed to the independent charge of the province of Multan by the Delhi rulers much to the chagrin of Mir Mannu, whose authority was thus severely curtailed. He despatched Kaura Mall to Multan with an army including some forces of Adina Beg Khan and newly recruited contingents of Sikhs under the command of Jassa Singh Ahluwalia. 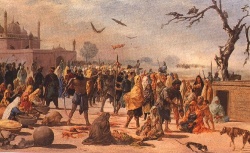 Mir Mannu and his massacre madness

Kaura Mall defeated the Multan army, cut off the fallen Shah Nawaz's head and sent it as a trophy to Mir Mannu. A grateful Mannu bestowed upon him the title of Maharaja Bahadur and made him governor of Multan. The Diwan who believed that he owed his success mainly to the Sikh soldiers, rewarded them generously.

By the autumn of 1751 the Punjab was rife with rumours of another Afghan invasion. Mir Mannu had failed to pay the revenue of the four districts ceded to the Durrani and, in the middle of November, advance units of Afghan army under General Jahan Khan crossed the Indus; Ahmad Shah followed closely behind.

Mir Mannu summoned Kaura Mall from Multan and Adina Beg Khan from Jalandhar and made preparations to join battle. In December 1751. he crossed the Ravi to check the Afghans. Instead of joining Jahan Khan. Ahmad Shah made a detour, and closed in on Lahore from the north-east. Mannu quickly retraced his steps and entrenched himself outside the city walls.

Hostilities between the two armies opened on 5 March 1752. Kaura Mall fell on the second day of the battle while Adina Beg quietly disappeared from the field. Mir Mannu fought as long as he could, and then laid down arms. The Afghans extracted an indemnity of thirty lakh of rupees in cash from Mannu. By the terms of the treaty, ratified by the Mughal emperor on 13 April 1752, Lahore and Multan were ceded to Ahmad Shah Durrani.

The death of Kaura Mall snapped the only link between Mir Mannu and the Sikh sardars. They had taken advantage of the conflict between the Afghans and the Mughals to spread out in the Bari Doab, Jalandhar Doab and across the Sutlej as far as Jind, Thanesar and beyond coming within 50 miles of Delhi.

Mannu discovering how Sikhs had occupied large parts of his territory, now resumed his policy of repression. Prices were once again laid on their heads and strict orders were passed against giving refuge to them anywhere. Skirmishes between Sikh bands and Mannu's roving columns took place in different parts of the province.

Mannu's musketeers combed the villages for Sikhs. The able-bodied from among them were killed fighting; the non-combatants including women and children were brought in chains to Lahore and slaughtered in the horsemarket. The fighting and reprisals went on until the death of Mannu on 4 November 1753 of an accidental fall from his horse.

With Mannu's death ended yet another attempt to quash the rising power of the Khalsa. A Punjabi doggerel which became current among Sikhs in those days sums up how light they made of the atrocity Mannu heaped upon them:

"Mannu is our sickle,
We the fodder for him to mow,
The more he cuts,
the more we grow."