Zakariya Khan (d. 1 July 1745) was the Mughal governor of Lahore from 1726 onwards when he replaced his father 'Abd us-Samad Khan' as governor of this famous historic city and province now part of Pakistan. He had earlier acted as the governor of Jammu from 1713 to 1720 and of Kashmir from 1720 to 1726. He had also taken part in the Lahore government's operations against the Sikh leader Banda Singh Bahadur. After the capture of Banda Singh and his companions in December 1715 at Gurdas Nangal, he escorted the prisoners to Delhi, rounding up Sikhs that he could find in villages along the route. As he reached the Mughal capital, the caravan comprised seven hundred bullock carts full of severed heads and over seven hundred captives.

Mass torture and persecution of Sikhs

After becoming the governor of the province in 1726, Khan Bahadur Zakariya Khan, shortened to "Khanu" by Sikhs, launched a still severer policy against the Sikhs and let loose terror upon them. His moving military columns forced the Sikhs to seek shelter in remote hills and forests. Yet Sikh bands continued harassing the administration attacking government caravans and treasuries. Such was the effect of their depredations that Zakariya Khan was obliged to make terms with them. In 1733, he decided to lift the quarantine forced upon the Sikhs and made an offer of a grant.

His envoy, Subeg Singh, a Sikh resident of the village of Jambar, near Lahore, who was at the time the kotwal (police inspector) of the city under Muslim authority, reached Amritsar where the Sikhs had been allowed to assemble and celebrate the festival of Baisakhi after many years of exile, and offered them on behalf of the government the title of Nawab and a jagir consisting of the parganahs of Dipalpur, Kanganval and Jhabal, worth a lakh of rupees in revenue each year. But the entente soon came to an end, before the harvest of 1735, Zakariya Khan sent a force and occupied the jagir. The Sikhs were driven away towards the Malva region by Lakhpat Rai, the Hindu minister at the Mughal court at Lahore. In the clashes that followed many officers of the Lahore army, including Lakhpat Rai's nephew Duni Chand, were killed. Zakariya Khan took the field himself to re-establish his authority in the region.

Rewards given for crime against Sikhs 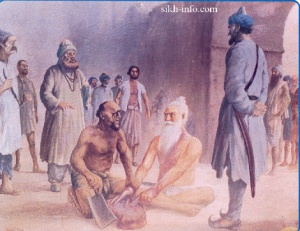 He had the fortress of Dalleval blown up and ordered village officials to capture Sikhs and hand them over for execution. A graded scale of rewards was laid down - a blanket for cutting off a Sikh's hair; ten rupees for information about the whereabouts of a Sikh; fifty rupees for a Sikh scalp. Plunder of Sikh homes was made lawful; giving shelter to Sikhs or withholding information about their movements was made a capital offence.

Zakariya Khan's police, consisting of nearly 20,000 men especially recruited for this purpose, scoured the countryside and brought back hundreds of Sikhs in chains. Prominent Sikhs including the revered Bhai Mani Singh and Bhai Tariff Singh were, after the severest of torments, publicly beheaded at the Nakhas, the horse-market of Lahore, renamed by Sikhs "Shahidganj" in honour of the martyrs. Yet Zakariya Khan remained unsuccessful in his object of vanquishing the Sikhs. He died at Lahore on 1 July 1745 a dispirited man, bequeathing to his sons and successors chaos and confusion.