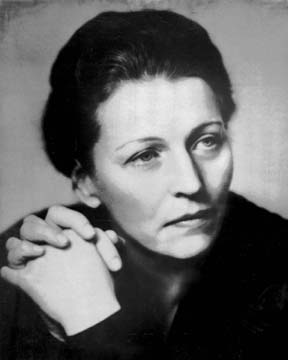 Pearl was born in Hillsboro, West Virginia, USA to Caroline Stulting (1857-1921) and Absalom Sydenstricker, a Southern Presbyterian missionary. The family was sent to Zhenjiang, China in 1892 when Pearl was 3 months old. She was raised in China and was tutored by a Confucian scholar named Mr. Kung. She was taught English as a second language by her mother and tutor.

The Boxer Rebellion (an uprising in China during 1899-1901) greatly affected Pearl Buck and her family. Pearl wrote that during this time, “…her eight-year-old childhood … split apart.” Her Chinese friends deserted her and her family, and there were not as many Western visitors as there once were. “The streets [of China] were alive with rumors - many … based on fact- of brutality to missionaries …” Pearl’s father was a missionary, so her mother, her little sister, and herself were “…evacuated to the relative safety of Shanghai, where they spent nearly a year as refugees…” (The Good Earth, Introduction).

From 1901 to 1933, she only left China briefly either to further her education or to escape from political and military upheaval in China. On May 13, 1917, she married an agricultural economist missionary, John Lossing Buck. The family mainly lived in Nanjing, where Pearl and John both had teaching posts at the University of Nanking.

From about 1933 she began her writing career in the USA. In 1935, she bought a sixty-acre homestead she called Green Hills Farm and moved into the one hundred year-old farmhouse on the property with her second husband and their family of six children. Green Hills Farm is where Pearl spent thirty-eight years of her life, raising her family, writing, pursuing humanitarian interests, and gardening.

Pearl was an extremely passionate activist for human rights. In 1949, outraged that existing adoption services considered Asian and mixed-race children unadoptable, Pearl established Welcome House, Inc., the first international, interracial adoption agency. In the nearly five decades of its work, Welcome House has assisted in the placement of more than five thousand children. 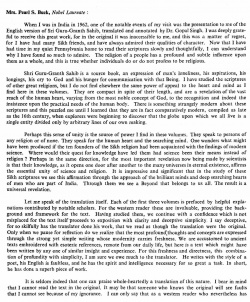 When I was in India in 1962, one of the notable events of my Visit was the presentation to me of the English version of Sri Guru-Granth Sahib, translated and annotated by Dr. Gopal Singh. I was deeply grateful to receive this great work, for in the original it was inaccessible to me, and this was a matter of regret, for I have had many Sikh friends, and have always admired their qualities of character. Now that I have had time in my quiet Pennsylvania home to read their scriptures slowly and thoughtfully, I can understand why I have found so much to admire. The religion of a people has a profound and subtle influence upon them as a whole, and this is true whether individuals do or do not profess to be religious.

Shri Guru-Granth Sahib is a source book, an expression of man’s loneliness, his aspirations, his longings, his cry to God and his hunger for communication with that Being. I have studied the scriptures of other great religions, but I do not find elsewhere the same power of appeal to the heart and mind as I find here in these volumes. They are compact in spite of their length, and are a revelation of the vast reach of the human heart, varying from the most noble concept of God, to the recognition and indeed the insistence upon the practical needs of the human body. There is something strangely modern about these scriptures and this puzzled me until I learned that they are in fact comparatively modern, compiled as late as the 16th century, when explorers were beginning to discover that the globe upon which we all live is a single entity divided only by arbitrary lines of our own making.

Perhaps this sense of unity is the source of power I find in these volumes. They speak to persons of any religion or of none. They speak for the human heart and the searching mind. One wonders what might have been produced if the ten founders of the Sikh religion had been acquainted with the findings of modern science. Where would their quest for knowledge have led them had science been their means instead of religion? Perhaps in the same direction, for the most important revelation now being made by scientists is that their knowledge, as it opens one door after another to the many universes in eternal existence, affirms the essential unity of science and religion. It is impressive and significant that in the study of these Sikh scriptures we see this affirmation through the approach of the brilliant minds and deep searching hearts of men who are part of India. Through them we see a Beyond that belongs to us all. The result is a universal revelation. 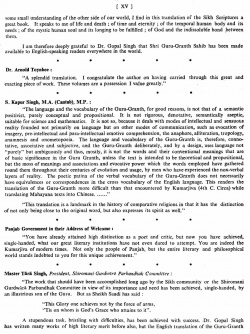 Let me speak of the translation itself. Each of the first three volumes is prefaced by helpful explanations contributed by notable scholars. For the western reader these are invaluable, providing the background and framework for the text. Having studied them, we continue with a confidence which is not misplaced for the text itself proceeds to exposition with clarity and deceptive simplicity. I say deceptive, for so skilfully has the translator done his work, that we read as though the translation were the original. Only when we pause for reflection do we realize that the most profound thoughts and concepts are expressed through the strong yet simple writing whose modernity carries freshness. We are accustomed to ancient texts embroidered with esoteric references, remote from our daily life, but here is a text which might have been written by any one of similar insight and experience. For this freshness and directness, this combination of profundity with simplicity, I am sure we owe much to the translator. He writes with the style of a poet, his English is faultless, and he has the spirit and intelligence necessary for so great a task. In short, he has done a superb piece of work.

It is seldom indeed that one can praise whole-heartedly a translation of this nature. I bear in mind that I cannot read the text in the original. It may be that someone who knows the original will see faults that I cannot see because of my ignorance. I can only say that as a western reader who nevertheless has

some small understanding of the other side of our world, I find in this translation of the Sikh Scriptures a great book. It speaks to me of life and death; of time and eternity; of the temporal human body and its needs; of the mystic human soul and its longing to be fulfilled; of God and the indissoluble bond between them.

I am therefore deeply grateful to Dr. Gopal Singh that Shri Guru-Granth Sahib has been made available to English-speaking readers everywhere in the world. 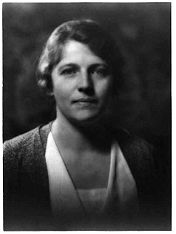 In 1964, to provide support for Asian-American children who were not eligible for adoption; she also established the Pearl S. Buck Foundation, which provides sponsorship funding for thousands of children in half a dozen Asian countries. When establishing the Opportunity House Foundation to support child sponsorship programs in Asia, Pearl said, "The purpose...is to publicize and eliminate injustices and prejudices suffered by children, who, because of their birth, are not permitted to enjoy the educational, social, economic and civil privileges normally accorded to children."

In her writings, she dealt with many topics including women's rights, emotions (in general), Asian cultures, immigration, adoption, and conflicts that many people go through in life.

Pearl S. Buck died of lung cancer on March 6, 1973 in Danby, Vermont and was interred in Green Hills Farm in Perkasie.