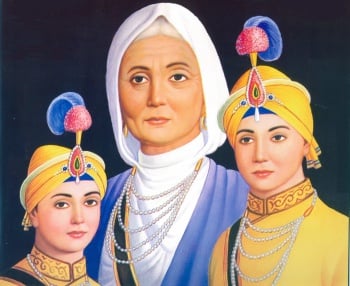 She was born in 1624 and was the daughter of Bhai Lal Chand Subulikka and Bishan Kaur, a pious couple of Kartarpur, in present-day Kapurthala district of the Punjab. Her role in the development of the Sikh faith has been crucial.

She was the wife of a supreme martyr; mother of a brave saint-soldier; and the grand-mother of four amazing children who all attained martyrdom at the ages of 6, 9, 14 and 18 years. She had been close to the two younger sahibzade and took up their guardianship in the flight from Anandpur under a promise of safe passage to Punjab. Imprisoned in the Thanda Burj of Sirhind with her youngest grandsons Zorawar and Fateh Singh, she attained martyrdom, at the age of 81 years, when she was told of their execution. 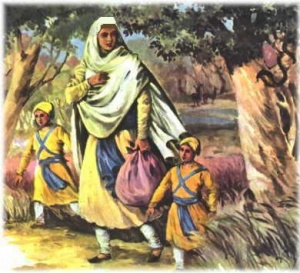 Mata Gujari walking in the wilderness with the younger Sahibzade

Her role was pivotal during the difficult period from about 1650 to 1705 for the people of India when Aurangzeb ruled this country from 1658 until 1707 and spread his tyranny and barbaric practices to the sub-continent. She was the "iron-lady" who was responsible for giving birth to and raising the last human Guru, Guru Gobind Singh.

She endowed in him the best qualities of the Sikh faith. Mata ji gave birth to Gobind Rai at Patna in 1666, when she was 42 and alone as her husband, Guru Tegh Bahadar was on tour across Bengal and Assam spreading the word of the Lord. She made sure that the young Gobind had the qualities of bravery and acute awareness and a highly discerning consciousness.

When she was 51 year old, her husband attained martyrdom and she had to guide the Panth and protected and guided the young Gobind to become the magnificent leader that he was. Again, her role during these years of widowhood are a clear example of how to accept the Hukam of the Lord and live a life of righteousness and chardikala.

In July 1677, Mata Gujri arranged the marriage of young Gobind (at the time aged 11 years) to Mata Jito ji (aka Mata Sundri). She was responsible for making of all the arrangement and for selecting the bride for the young Guru.

Some eight years later, in May 1685, when Mata ji was aged 61, she arranged the Maklaavaa (the formal ceremony when the wife formally comes to the husband's house) for young Gobind, who at the time was only 19 years old. She played an important part in making sure that the young couple were versed in the way of the Gurus and that the message of Guru Nanak was practiced and honoured by the young couple.

The Wife, Mother and now Grandmother

For the next 20 years from 1685 to 1705, she was a pillar of strength and a constant support for the young Gobind guiding him and his family. After arranging his marriage and maklaavaa, she guided the young couple in times of difficulties and helped to steer them in the correct path of the Panth. She subsequently helped to raise her grand-children. Sahibzada Ajit Singh was born in 1687; Sahibzada Jujhar Singh in 1691; Sahibzada Zorawar Singh in 1696; and Sahibzada Fateh Singh in 1699.

When Mata ji was aged 76, in 1700, Mata Sundri ji died. It was from then that the younger Sahibzade were primarily brought up by Mata ji. She was like a mother to the two young boys. They relied on her for support and comfort and she was just like a mother to these young kids. Mata was very close to these kids and lived and died with them in 1705.

It was because of her dedication that the young kids were so staunch in their faith and were at the young age of about 6 and 9 years able to stand up to the mighty Mughal empire and defy them. They gave up their precious lives but did not give up their Sikhi – a lot of the credit for bringing up such outstanding children must go to Mata ji.

Shashi Bala, Reader of Guru Nanak Dev University, writes, “Mata Gujri holds the position of wife of a martyr, mother of martyr, the grandmother of martyrs and herself a martyr.” She truly knew how to live and she definitely knew how to die. She remains an inspiration for millions of souls for all time to come.

She was born in 1624 and was the daughter of Bhai lal Chand Subulikka and Bishan Kaur, a pious couple of Kartarpur, in present-day kapurthala district of the Punjab. Lal Chand had migrated from his ancestral village, Lakhnaur, in Ambala district, to settle at Kartarpur where his daughter Gujari was married to (Guru) Tegh Bahadur on 4 February 1633. The betrothal had taken place four years earlier when Tegh Bahadur had come to Kartarpur in the marriage party of his elder brother, Suraj Mall. Bishan Kaur, the mother, had been charmed by the handsome face of young Tegh Bahadur and she and her husband pledged the hand of their daughter to him.

After the marriage ceremony, the couple came to reside in Amritsar. Bride Gujari won the appreciation of everyone "Like bridegroom like bride" records Gurbilas Chhevi patshsahi. "Gujari is by destiny made worthy of Tegh Bahadur in every way." In 1635, Mata Gujari left Amritsar with the holy family and went to reside at Kartarpur, in the Sivalik foothills. After of Guru Hargobind (the sixth Sikh Guru) left this world in 1644, she came with her husband and mother-in-law, Mata Nanaki, to Bakala, now in Amritsar district of the Punjab. There they lived in peaceful seclusion, Tegh Bahadur spending his days and nights in meditation and Gujari performing the humble duties of a pious and devoted housewife. After he was installed Guru in 1664, Guru Tegh Bahadur, accompanied by Mata Gujari, went on a visit to Amritsar, traveling on to Makhoval, near Kiratpur, where a new habitation, named Chakk Nanaki (later Anandpur Sahib) was founded in the middle of 1665.

Soon after this, Guru Tegh Bahadur along with his mother, Bibi Nanaki, and wife, Gujari, set out on a long journey to the east Leaving the family at Patna, he traveled on to Bengal and Assam. At Patna, Mata Gujari gave birth to a son on 22 December 1666. The child was named Gobind Rai, the illustrious Guru Gobind Singh of later day. Guru Tegh Bahadur returned to Patna in 1670 for a brief stay before he left for Delhi, instructing the family to proceed to Lakhnaur, now in Haryana. 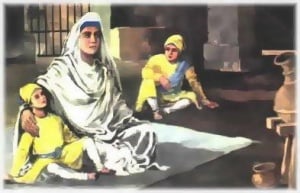 Mata Gujari accompanied by the aged Mata Nanaki and young Gobind Rai, reached Lakhnaur on 13 September 1670, where she stayed with her brother Mehar chand, until she was joined by her husband. An old well just outside Lakhnaur village and reverently called Matta da Khuh or Mata Gujari Da Khuh (the "well of Mata Gujari") still commemorates her visit. From Lakhnaur the family proceeded to Chakk Nanaki where Guru Tegh Bahadur rejoined them in March 1671 after spending some more time traveling through the Malva region and meeting sangats. At Chakk Nanaki, 11 July 1675 was a momentous day when Guru Tegh Bahadur left for Delhi prepared to make the supreme sacrifice. She showed courage at the time of parting and bore the ultimate trial with fortitude. Guru Tegh Bahadur was executed in Delhi on 11 November 1675, and, Guru Gobind Singh then being very young, the responsibility of managing the affairs at Chakk Nanaki, initially, fell to her. She was assisted in the task by her younger brother Kirpal Chand ji. 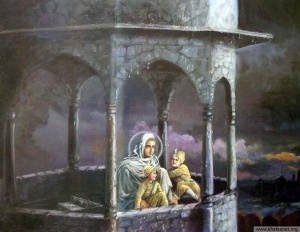 Mata ji received Amrit during the Vaisakhi Amrit Sanchar along with the rest of the family and was renamed 'Gujar Kaur'. When in face of a prolonged siege by hostile hill rajas and Mughal troops, Chakk Nanaki (Anandpur Sahib) had to be evacuated by Guru Gobind Singh on the night of 5-6 December 1705, Mata Gujar Kaur with her younger grandsons, Sahibzada Zorawar Singh and Fateh Singh, aged nine and seven year respectively, were separated from the main body while crossing the swollen rivulet Sarsa. The three of them were led by their servant, Gangu, to the latter's village, Saheri, near Morinda in present day Ropar district, where he treacherously betrayed them to the local Muslim officer.

Mata Gujar Kaur and her grandsons were arrested on 8 December 1705 and confined in Sirhind Fort in what is referred to in Sikh chronicles as Thanda Burj, the cold tower. As the children were summoned to appear in court from day to day, the grandmother kept urging them to remain steadfast in their faith. On 11 December they were ordered to be bricked up alive in a wall, but, since the masonry crumbled before it covered their heads, they were executed the following day. Mata Gujar Kaur ji was imprisoned on top of a tower which was opened from all sides without any warm clothes in very cold month of December. She continued the tradition of Sikhi and without complaints give her body singing guru ki Bani. Mata Gujar Kaur ji attained martyrdom the same day as her grandsons.

No doubt Guru Nanak Dev ji had said "Why isn't woman equal to man when she is who gave birth to kings, and protectors of Dharma". Mata Gujar Kaur ji through upbringing of her grandsons played such an important role in Sikhi that as Sikhs, we can owe our existence to her. It was due to her teachings that 6 year old and 9 year old did not bulge from their Dharma and attained martyrdom. Thus continuing and emphasizing the institute of martyrdom in Sikhism. Seth Todar Mall, a kindhearted wealthy man of Sirhind, cremated the three dead bodies the next day.

At Fatehgarh Sahib, near Sirhind, there is a shrine called Gurdwara Mata Gujari (Thanda Burj). This is where Mata Gujar Kaur ji spent the last four days of her life. About one kilometer to the southeast of it is Gurdwara Joti Sarup, marking the cremation site. Here, on the ground floor, a small domed pavilion in white marble is dedicated to Mata Gujar Kaur. The Sikhs from far and near come to pay homage to her memory, especially during a three-day fair held from 1113 Poh, Bikrami dates falling in the last week of December. 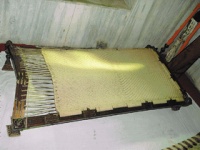 Lakhnaur Sahib Gurdwara has a rich Sikh history as Guru Gobind Singh had stayed at Lakhnaur village as a child.

The booklet, qouting Sikh scholar Bhai Veer Singh, states, “This is a place where Shah Arfdeen, Pir of Karnal, and Syed Shah Mira Bheek Sinhanvi paid obeisance to Guru Gobind Singh.” This is a holy place of the Sikhs, being the residence of the maternal grandparents of Guru Gobind Singh and the home of the in-laws of Guru Tegh Bahadur.

Lakhnaur village is situated on the Ambala-Lalana road (Gujari Marg), which is four and a half kilometres from Ambala Cantonment. The area had earlier been under the control of the Patiala Estate. It is believed that the old names of Lakhnaur were Lucknavti, Luckhunpur or Lakhinagar.

It is said that in 1499 AD Guru Nanak visited this place during his first pilgrimage. At that time, one of the forefathers of Bhai Lal Chand Subhakiya, maternal grandfather of Guru Gobind Singh, paid obeisance to Guru Nanak and became his staunch disciple.

It is mentioned in “Guru Bilas Patshai Chhevin”, written by Mahakavi Sohan, that the marriage of Guru Tegh Bahadur was solemnised with Mata Gujari, daughter of Bhai Lal Chand Subhakiya, on ‘Assu’ 15, Samvat 1688, at Kartarpur. After that, Bhai Lal Chand left Kartarpur and again started to live at Lakhnaur.

Thereafter, Mata Gujari and Guru Gobind Singh left ‘langar’ vessels, cots and ‘astra-shastra’ at Lakhnaur and proceeded to Punjab. All these articles are still present in Gurdwara Lakhnaur Sahib. There is also an old ‘Hukumnama’.

Guru Gobind Singh, who resided at Lakhnaur as a child, used to play ‘khido-khundi’, ‘gatka baji’, ‘teer-andazi’, ‘neja baje’, ‘dhal talwar’ and practice on other weapons.

Excerpts taken from these books: