From SikhiWiki
(Redirected from Kirpa Ram)
Jump to navigationJump to search 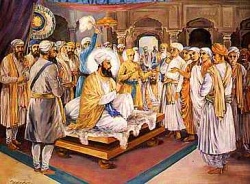 Pandit Kirpa Singh Dutt (d. 1705)(aka Pandit Kirpa Ram, born Kirpa Ram Dutt) was the son of Bhai Aru Ram, a Saraswati Brahmin of Matan, 65 km east of Srinagar, in Kashmir. Aru Ram had met Guru Har Rai and sought his blessing at the time of the latter's visit to Kashmir in 1660.

A group of Kashmiri Brahmins came to Guru Tegh Bahadar at Anandpur in May 1675 for protection against atrocities of Aurungzeb. Kirpa Ram led this group of Kashmiri Pandits driven to dire straits by State Persecution. They had faced stiff taxes, atrocities, cruelty under Muslim Mughal governor of Kashmir. Honour of their daughters was being lost and they were losing their religion to the fanatic zeal and proletyzation activities of Islamic crusaders.

Iftikhar Khan, governor of Kashmir (1671-75) was a harsh man and was making forcible conversion to Islam. Kashmiri Brahmins asked Guru for a solution. Guru replied "Such activities can only be stopped by a sacrifice of a great person". Just then 8 years old son of Guru Tegh Bahadar, Gobind Rai (Later Gobind Singh) walked into the meeting to find his father lost deep in thoughts. He enquired about the reason.

He offered a possible solution by saying "who else is greater then you, O father". Guru Tegh Bahadur knew then his ultimate mission and Dharma. He told Kashmiri Brahmins "Go tell Aurangzeb that if they can convert your Guru then you will all become Muslims." Kirpa Ram obliged and Aurangzeb issued summons for Guru. Guru performed the ceremony and declared that next Guru will be his son, Gobind Rai.

Guru Tegh Bahadur whose help the visitors sought asked them to go and have it communicated to the Emperor that, if he (Guru Tegh Bahadur) was converted, they would all voluntarily accept conversion. Kirpa Ram and his companions sent to Emperor Aurungzeb a petition to that effect through Zalim Khan, a governor of Lahore.

In the summer of 1675, the Guru, along with some of his companions were finally brought to Delhi and asked to convert to Islam or else face the penalty of death. Guru ji was also asked to perform a miracle. Guru Tegh Bahadur averred that he would rather sacrifice his life than give up his faith and his freedom or belief or perform a miracle.

Thus, under Aurangzeb's orders, Guru ji and his companions were tortured. The Guru was chained and imprisoned in a cage and was tortured in the cruellest and the most inhuman ways for five long days. In order to terrorise him further into submission, one of his distinguished devotees (Bhai Mati Das) was sawn alive, another (Bhai Dyal Das) was boiled in the cauldron and the third (Bhai Sati Das) was roasted alive before the Guru.

Finally, the Guru himself was beheaded, under imperial warrant, in broad daylight, in the middle of a public square, the most prominent public place in India, called Chandni Chowk, of Delhi, on the charge that he was a stumbling block preventing the spread of Islam in the Indian subcontinent. The exact location of the beheading is marked by Gurdwara Sis Ganj in Delhi.

His martyrdom was yet another challenge to the Sikh conscience. It was then realized that there could be no understanding between an insensate power imbrued with blood and a proud people wedded to a life of peace with honour. The sacrifice roused the Hindus from their passive silence and gave them the fortitude to understand the power that comes from self-respect and sacrifice. Guru Tegh Bahadur thus earned the affectionate title of "Hind-di-Chadar" or the Shield of India.

Guru Gobind Singh from 1675 until 1690 took an extensive courses in Sanskrit, Persian, Arabic, and Punjabi in educating himself. According to chronicles, Pandit Kirpa Ram Dutt helped Guru Gobind Singh in his Sanskrit studies.

Guru Gobind Singh having contemplated the history of Sikhi, the martyrdom of Guru Arjan Dev (his great grand father), the martyrdom ofGuru Tegh Bahadur (his father) decided to create the Khalsa. The Khalsa was created at Anandpur on March 31st 1699.

Pandit Kirpa Ram Dutt became Kirpa Singh after taking Khanda Bate da Pahul. In 1699 he received the holy Amrit and entered the fold of the Khalsa.

The Hill Rajas and Mughals attack

In 1704, the forces of the local Rajput Rajas who were alarmed by the rapid changes that Guru Gobind Singh was making in the rigid caste based Hindu religion. Particularly troubled over the growing number of converts from the Hindu and Muslim faiths and angered by the Guru putting a sudden and abrupt end to the converts' historical caste designations (even adopting the Rajputs' traditional name Singh (lion), previously only used by the Rajput warrior caste of Hinduism, sought the help of their Mughal allies to put and end to this new religion which clearly threatened their privileges.

The Mughals having lost men in previous battles with the Sikhs were only too glad to attack the fort of Anandpur, and after many months and several defeated attempts to take the city and a long siege, the Sikhs, low on both supplies and ammunition and nearly starved, agreed to abandon the city under a second promise of safe conduct to Punjab (during the first promise of safety a party of Sikhs and a 'pretend' treasure filled train of wagons was quickly attacked and looted), but to the dismay of the attackers the clever Guru had ordered the wagons loaded with trash covered in rich cloth. Under a second set of oaths 'sworn on the Qur'an and holy cow' (even bearing the mark of Aurangzeb) the Guru was finally persuaded by his devotees to give up Anandpur.

Once again the Rajputs and Mughals broke their promises and chased after the retreating Sikh forces. Reaching the rain swollen Sarsa river's frigid waters the Sikhs were suddenly attacked. In the ensuing confusion, the Guru's soldiers and his family members were divided, departing in different directions.

Kirpa Singh becomes a martyr himself

The next morning as the attack began the Guru, a master archer, dispatched anyone foolish enough to expose their themselves to his deadly aim. Finally with their arrows and powder running out the Sikhs in parties of five, exited the high perimeter mud walls through the haveli's only gate.

Pandit Kirpa Singh was among the valiant parties of five which even included the Guru's two sons Ajit Singh, and Jujhar Singh. The death and carnage the Sikhs dealt the opposing forces was frightful. The battle had raged throughout the day which as night fell saw the attacking forces retreat to lick their wounds and regroup making plans for the next day when surely, they thought, they could capture or kill the Guru himself and earn a handsome bounty.