From SikhiWiki
(Redirected from Punjab state)
Jump to navigationJump to search 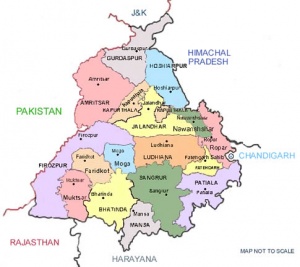 This is the Punjab in India

Punjab: A region that is split across the political borders of India and Pakistan. It is situated in the north western region of India. Punjab has a predominantly Sikh population.

The Word 'Punjab' means 'Five Rivers'. The geographical area of Punjab consists of plains which are irrigated by five rivers. These rivers are the Beas, Sutlej, Chenab, Ravi and Jhelum.

After the Independance of India in 1947, Punjab was divided between India and Pakistan. India retained the new East Punjab whilst Pakistan gained the western plains of Punjab and the old capital city of Lahore.

Punjab is a land famous for Sikhs as this is where the majority of Indian Sikhs reside. It is the land where most of the Gurus were born, and is rich with their history and spirit. Punjab has a famous, and bloody history as well. Punjabi people are known for their fearlessness, physical strength, business aptitude, work ethic, honesty, and festive culture. Punjabis are also considered a very proud people.

Present day Punjab state of India is surrounded by the following states/provinces:

The Punjab covers an area of 50,362 square kilometres (19,445 square miles) and has a population around 24,000,000 in 2000.The name "Punjab" means "land of five rivers" and derives from the Persian words 'panj,' meaning five, and 'aab,' meaning water. The rivers, tributaries of the Indus River, are the Beas, Chenab, Jhelum, Ravi, and Sutlej. The five rivers, now divided between India and Pakistan. Area of Punjab that is between rivers of Beus and Satluj is called Doaba, major cities in this part of punjab are Jalandhar, Hoshiarpur and Nawan Shahr. Majha is between Beus and Chenab and on both sides of Ravi, this part is called the heart of Punjab and cities include Amritsar, and,Gurdaspur. Area of Malwa which makes up the majority is the southern part of Punjab facing Rajasthan and East of river Beus, cities include Ludhiana, Barnala, Mansa, Muktsar, Ropar, Moga, Chandigarh, Bathinda, Faridkot, Ferozpur, Patiala, Ambala, Karnal, Sangrur, Malerkotla, Shahabad, and Abohar.

Punjab, northwestern India, is bounded on the west by Pakistan, on the north by Jammu and Kashmir, on the north east by Himachal Pradesh and on the south by Haryana and Rajasthan. Physically, the state may be divided into two parts, sub Shivalik strip and Sutlej-Ghaggar Plain. The sub-Shivalik strip covers the upper portion of Ropar, Hoshiarpur and Gurdaspur districts. The Sutlej-Ghaggar Plain embraces the other districts of the Punjab. Most of the Punjab is an alluvial plain, bounded by mountains to the North. Despite its dry conditions, it is a rich agricultural area due to the extensive irrigation made possible by the great rivers. The Indian Punjab is the wealthiest state in the country per capita, with most of the revenue generated from agriculture.

Punjab is one of the smallest states of India representing 1.6 per cent of its geographical area and 2.6 per cent of it's cropped area. Agriculture occupies the most prominent place in Punjab's economy. About 70 per cent of the people are engaged in agriculture. As against an all India average of 51 per cent, it has 85 per cent of its area under cultivation. the state on an average, account for 23% of Wheat , 14 % of cotton and 10% of rice production of the whole country. It is only the districts of Ropar and Hoshiarpur that the cultivated area is less than 60 per cent of the total. It is in these districts that considerable land is covered by Shivalik Hills and the beds of seasonal streams that cannot be brought under cultivation.The fertilizer consumption in Punjab is the highest in India. The impact of the Green Revolution is perhaps most affected the state of Punjab .This has made the country self sufficient in the food needs, overcoming the dangerous situation of early sixties.

The state of Punjab has built up a system of services to support agricultural development. Briefly, these are the departments of Agriculture and Animal Husbandry, the Punjab Agriculture University which provides a base for education, research and extension; and the Cooperative Department which provides credit to the farmers. The university situated in Ludhiana, has brought about a real revolution in farming techniques and has contributed to increased agriculture production and improvement of the cultivators' economic status. This institution has developed high yielding varieties of wheat, rice, bajra and other crops which has spearheaded Punjab to make the state and the country self sufficient for many key crops.

The efforts of the state government to provide irrigation facilities, cheap power and agriculture inputs at subsidised rates have acted as a catalyst for agricultural production. Total production of food grains rose from 170.92 lakh tonnes in 1987-88 to 207 lakh tonnes in 1992-93. Agricultural production is now nearing the saturation point. Punjab's contribution is highest in the procurement of food grains for the central pool. Production of wheat in 96-97 was 136.78 lakh tonnes, a record. To reduce dependence on wheat , paddy rotation , the state government is encouraging gradual shift in the cropping pattern to oil seeds such as Sun-flower and Soya beans with positive results. The state is on he threshold of a second spurt n productivity levels.

As many as 188,000 small scale industrial units are registered in the state till April 1993 (as compared to 135,305 in 1987-88) with a capital investment of Rs. 1973 crore. The chief manufactures are textiles, sewing machines, sports goods, sugar, starch, fertilizers, bicycles, scientific instruments, electrical goods, machine tools and pine oil. The size of Punjab's Ninth Plan is Rs. 11,550 cr., at 96-'97 prices. A Science City is being setup at Jalandhar.

The Punjab's per capita income is nearly double the all-India average (in second place is Haryana). Although Punjabi's comprise less than 2.5% of India's population, they provide 22% of India's Wheat and 10% of its rice. The Punjab provides a third of all the milk production in India. Punjab also has a number of thriving industries including Hero Bicycles at Ludhiana.

The Legislature is unicameral. The state is divided into 17 districts. Of these, Moga, Muktsar and Nawanshehr were inaugurated in Nov.'95. Three more Barnala, Mohali and |Tarn Taran make a total of 20 administrative districts of the state of Punjab. Below is a full list and the area covered by each district per sq. Km.

Below are some of the major cities of the Punjab . Each have their own unique attractions.

Above with thanks to: