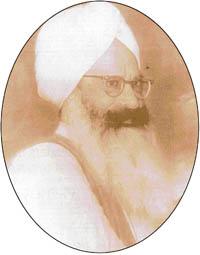 Pratap Singh Kairon (1901–1965) was the Chief Minister of the Punjab province (then comprised of Punjab, Haryana and Himachal Pradesh), and is widely acknowledged to be the architect of post-Independence Punjab Province (or Punjab, Haryana and Himachal as of today). Moreover, he was an Indian independence movement leader who was jailed twice by the British Empire, once for five years for organising protests against British rule. His political influence and views are still considered to dominate Punjabi politics; he is sometimes called the "father of modern Punjabi politics".

Pratap was born on October 1, 1901, into a Dhillon Jat family of the village of Kairon in the Amritsar district, province of Punjab during the British Raj. His father, Nihal Singh was a pioneer in initiating women's education in the province. Pratap studied at the Khalsa College, Amritsar and then went to the U.S., where he supported himself by working on farms and in factories. He acquired a Master’s degree in political science from the University of Michigan in the US. After that he spent the next 10 years in the US, working in a farm for 12 to 14 hours a day. Influenced by the farming methods practised in the U.S.A., he hoped to replicate the same in India later.

Entry into politics and contribution to Indian independence movement

Kairon returned to India in 1929. On April 13, 1932 he started an English weekly paper, The New Era, in Amritsar. He joined politics and the newspaper eventually shut down. He was at first, a member of the Shiromani Akali Dal and later of the Indian National Congress. He was jailed in 1932 for five years for participating in the Civil disobedience. He entered the Punjab Legislative Assembly as an Akali nominee in 1937, defeating the Congress candidate, Baba Gurdit Singh of Sarhali.

From 1941 to 1946, he was the general secretary of the Punjab Provincial Congress Committee. He was jailed again in the 1942 Quit India Movement and was elected to the Constituent Assembly in 1946.

As Minister for Rehabilitation in the days immediately after the Partition, Kairon ended the chaos and confusion and got down to work handling the tough task of resettling millions of refugees who had migrated from West Punjab. Forced to leave their homes over three million people were re-established in East Punjab in new homes and often in new professions, in a very short period of time.

Pratap Singh Kairon was a man of vision. He laid the base on which Punjab prospered. In his role in implementing land reforms:

IN today’s world, when it is hard to find citizen-friendly administrators, it was heart-warming to hear P C Hota, a former union secretary and Chairman of the Administrative Reforms Commission, sketch the character of the late Partap Singh Kairon, a former Chief Minister of Punjab, at CRRID, Chandigarh.

On his return, he became part of the freedom movement in India. Kairon began his political journey by joining the Congress in 1929, underwent five-year jail term in 1932 and got elected to the Punjab Legislative Assembly in 1936 and then again in 1946. He eventually became Chief Minister in 1956.

Although Hota never worked with Kairon, yet he was immensely impressed by this politician, and his work on Kairon’s life shows it.

Some interesting observations and instances collected by Hota will give you a peep into Kairon’s personality. For instance, when Kairon became Chief Minister, a childhood friend of his sent him a letter expressing his excitement over Kairon’s elevation. At this, Kairon send a flag car for his farmer friend and asked him to be his guest. His friend was totally bowled over, when he saw Chandigarh from the ninth floor of the secretariat. He remarked, "What a view"? Kairon was quick to tell him, "In Punjab, there is view and view and view right from under secretary onwards."

On prohibition, Kairon said, "It is the fetish of fools." He himself was a teetotaller. He also firmly dealt with the bureaucracy of Punjab.

He was a man of strong likes and dislikes, which eventually led to his downfall. However, the concrete steps that he took for Punjab display his vision.

He also placed Punjab on the industrial map of the country. He was behind the creation of the city of Chandigarh and the industrial township of Faridabad(in present-day Haryana). Kairon made primary and middle school education free and compulsory. He opened three engineering colleges and a polytechnic in each district. He was responsible for establishing much of the state's basic infrastructure in terms of irrigation, electrification and roads. Punjab was the first state in the Indian Union to have all its villages electrified.

He ushered huge prosperity for Punjab. His successors have largely frittered away the development he brought about.

In 1964, following the publication of the report of the commission of enquiry which had exonerated him of the bulk of the allegations made against him by his political adversaries, Partap Singh Kairon resigned from his position as chief minister of the Punjab. On February 6, 1965, he was on his way from Delhi to Chandigarh when he was waylaid near Rasoi village, Rohtak district, and shot dead along with his personal assistant, an IAS officer, and the driver.