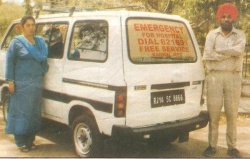 Kanwal Jeet Singh is based in Jaipur, India and has been recognised as such by several local newspapers. He has a full time job like most of us and works as Assistant Manager with the State Bank of India. Bhai sahib was born on 10 September 1957 and is married with 2 children, daughter, Manpreet Kaur who is a project engineer and son Harmanpreet Singh who is studying in Manipal.

Bibi Manjeet Kaur, born in the Sikh holy city of Amritsar is a homemaker and is equally devoted to Seva for the local community. She is a postgraduate in English literature and as her children are now older, has devoted her life to public service as required and advocated by the Gurus and as outlined by the sakhi of Bhai Ghanaiya, where the tenth Guru highlighted the importance of seva without reference to any one race or community or section of the community - Seva has to be done without discrimination or segregation and without motivation of any fiscal or material reward.

Since 1996, Bhai sahib and Bibi ji have been providing a valuable and free ambulance service to their local community and carrying out one of the principle instructions of Guru Nanak which we call Seva - Selfless service to humanity. Many local needy and desperate people 'bank' on this team of sevadars with their hopes, aspirations and regular requests for help. And they never disappoints them. There is never a "NO" in their dictionary when it comes to Sewa - Selfless service.

A lifeline on wheels He's a bank clerk by day, an angel of life by night. Sukhmani Singh meets Kanwaljit Singh, Jaipur's hope in a Maruti van

In the depths of Jaipur's congested Raja Park lives neighbourhood celebrity Sardarji vanwale, who has an unusual nocturnal passion.

Kanwaljit Singh. 45, works as a banking clerk in the Stale Bank of India. By night, after he has hung up his boots and put aside his files, he kicks off his second shirt: ferrying sick patients to hospital in his makeshift Maruti van ambulance anywhere in the city. The service complete with Sikh devotional songs blaring from a stereo is free and funded entirely by his own meagre savings.

And during the day, Kanwaljit Singh's Amritsar bred wife Manjit Kaur, a homemaker, attends to their 24-hour phone helpline, often abandoning her own two children, aged nine and 13, to drive to the rescue.

In their service to the sick, the couple boast an ever-expanding home library of essential hospital items – ranging from eight wheelchairs, a water bed, drip stands and stretchers to a wide array of plastic bedpans. These are loaned out free to anyone who requires them. Rather than investing money in shares or fixed deposits, each month Singh exhausts his salary on new surgical items. Currently, three wheelchairs have travelled to the Hajj with a group of Muslim invalids.

So what about personal savings? Kanwaljit shrugs: "I have all God's savings, what is the need to worry?”

So who inspired these homebred Florence Nightingales? Kalwaljit's father, government servant Kartar Singh. after whom the service is christened ”Kartar Sewa Kendra”.

The old man, who died of prostate cancer a few years ago, was a member of the Red Cross. Says Kalwaljit, "As a Sikh. I was always conscious that 10 per cent of our earnings should go to charity. From the start, I was fond of donating old books to patients in the SMS hospital. I prefer to help needy persons with my own hands rather than donating money in a gurdwara,. lf any patient asked me to mail a postcard or any other service it gave me joy to help out."

Five years ago, the idea of running an ambulance service germinated from a chastening personal experience. While holidaying at the famous sulphur-springs in Sahastradhara near Dehradun. the Singh's three-year old son Harmanpreet tumbled and broke his right elbow. With great difficulty, they carried the wailing infant to Dehradun by taxi, reaching a private clinic where they were informed that the bone had shattered into four pieces and required surgery.

"Everyone went out of their way to help us and I realised that there are good people in the world," recalls Kanwaljit. Determined to join their club and repay his debts, a year later, he pledged his National Savings Certificates for a car loan. The rest is history.

But Kanwaljit has always been the archetypal “Good Samaritan”. During the 1990 Hindu-Muslim riots in Jaipur, he regularly carried milk and food for his Muslim friends in the walled city. And even while driving his Hero Honda, he never hesitated to assist the injured.

Three years ago, while driving down a crowded road in Agra, he spotted a man whose head had been split open lying pinned under a truck. Singh carried him to hospital on his motorcycle, then later, even took him home to his neighbouring village. So far he has rescued some ten people injured in road accidents. As he says. "The police have never harassed me or even summoned me to court ."

His spirit of social service now imbues his whole family. His wife Manjit Kaur learnt driving three years ago and began transporting patients at a time, when, as she laughs, " I did not even know how to reverse a car or drive up the hospital ramp. I used to shudder at the sight of my own blood. But I just shut my eyes and prayed to Waheguruji and I managed.

When there is a patient with me, it gives me a strange confidence, and when grateful people give me their ashirwaad (thanks, blessings), I feel I have had a darshan (audience) with God."

Manjit proudly informs that 90 per cent of the patients she ferries invariably survive, due to the constant prayers she recites, head covered, while driving. "Once I took a diabetes patient, Jugal Kishore, to hospital. His blood sugar had dropped very low. The doctor told me he would have died had I reached even five minutes later. Now he blesses me every time he meets me on my morning walk.

Speak to their little son, Harmanpreet and he talks passionately about building a hospital when he grows up. If a call comes while his mother is making rotis, he commands her to rush, sportingly offering to eat bread instead.

Kaur aspires to "do something by which the world remembers me. I married into this family of simple livers and high thinkers with just three dresses. We do not spend on luxuries but I feel I am complete in every way." She regularly organises kirtans in the city, teaches Gurmukhi and works as a traffic warden whenever she is needed. " I was always a tomboy even as a child and preferred playing with marbles or flying kites," she smiles.

Her husband Kanwaljit still nurses an unfulfilled ambition to build a “vriddh ashram” (old people home/sanctuary) for the old. I feel their own relatives do not give them enough respect.

The Amritdhari Sikh plans to take voluntary retirement from his bank later and build an ashram. “I will have a big prayer hall where people of all religions can pray,” he promises.