Gurdwara Dudh Wala Khuh Sahib is located in the town of Nanak Mata, district Udham Singh Nagar, near Gurdwara Nanak Mata Sahib. Gurdwara Dudh Wala Khuh Sahib is associated with the first Guru, Guru Nanak Dev ji who came here during his Third Udasi or travel in 1514 A.D. The yogis who inhabited this place possessed a large number of cows. Bhai Mardana expressed a desire for milk. Guru ji told him to ask the yogis for some milk. 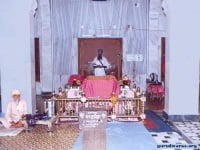 However, they refused to give him any milk and taunted him by telling him to get milk from his Guru. By virtue of his spiritual powers, Guru Sahib drew all the milk from the cows of the yogis and stored it in a well. It is said that the water of this well tasted like milk. Since that time, this well is called the Dudh Wala Khuh, or the Well of Milk.The main gurpurab celebrated here is the birthday of Guru Nanak Dev ji. The small marble structure of this beautiful gurdwara rises from amidst lush green fields and orchards. Along with the historic well, the gurdwara is a sight to watch. However, as the gurdwara is close to the main gurdwara Nanakmata Sahib, it has limited resources of its own