Guru Arjan and the sangat from Kabul 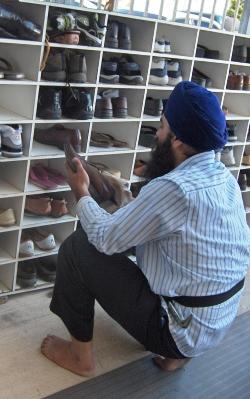 This sakhi (orally narrated true historical account) is told in Sikh families from the time of Guru Arjan Dev (1563 - 1606), the fifth Sikh Guru. Once a large dedicated sangat (a group of devotees) was coming from Kabul (capital of Afghanistan) to Amritsar for the darshan (audience, blessings) of the Guru. They had heard many great things about the Guru and were very eager to see him, check out this wonderful personality and to be blessed by such a holy person of God.

It was a long journey of over 600 kms (375 miles) and they had been on their journey by road for many days. As they were near Lahore on their way to Amritsar, they were met by a Sikh and his wife. The kind Sikh and his wife were very helpful and did a lot of sewa (service) for the sangat; the members of the sangat were very pleased for the assistance given by these two volunteers.

The volunteers had massaged the tried legs of some of the elderly members of the party; waved fans over them as they rested; brought water and food for them; and helped them with whatever they requested.

The Sangat rests for the night

The next day they proceeded with this Sikh to Amritsar. Everyone was very excited as they approached the holy shrine. As they reached the Darbar Sahib in Amritsar, the leader of that Kabul sangat asked a few of the boys to take care of the shoes of everyone. However, none of the boys wanted to stay behind, as they were all very eager to be the first ones to have audience (or darshan) of the Guru. At last the Sikh came to the rescue and came forward and said he would look after their shoes.

The excited Kabul sangat crossed the bridge connecting the perimeter around the sacred pool to the inner structure and went inside the Darbar building hoping to meet the Guru. They sat down and waited for 30-45 minutes. But the Guru did not show up. Where was the Guru? May be he had gone somewhere for some other business? After waiting for nearly an hour, the Kabul jathedar went ahead and asked Baba Buddha ji where Guru ji was.

The dialogue between the Jathedar and Baba Buddha ji

Jathedar: Baba ji, we have come to see the Guru. Can you tell us where we can find the Guru?

Babaji: Guru ji has gone to see the sangat coming from Kabul.

Jathedar: But we are the sangat from Kabul!

Jathedar: No Baba ji, we didn't. However, we did meet a Sikh and his wife and they did a lot of sewa for us.

Babaji: Where is that Sikh now?

Jathedar: We left him to look after the shoes of the sangat.

To Baba Buddha ji's surprise, it was none other than Guru Arjan Dev Himself. As a sign of respect, Baba Buddha Ji went forward and took away the shoe in the hand of the Guru that he was cleaning.

Baba ji said "Guru ji, Why are you doing this?". Then the entire sangat realised the real gravity of the situation and many now had tears flowing.

Baba ji agree "Guru ji, indeed these are Guru Nanak's shoes" And reverently touched his forehead onto those shoes.

Moral of the sakhi