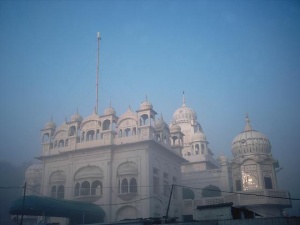 Kurukshetra is in fact the name of a region lying between the Ghaggar and Saraswati rivers, although a large township of this name has also come up, which includes several temple complexes, Kurukshetra University and district headquarters. The name of the adjoining ancient town in Thanesar. The twin towns are now popularly known as Kurukshetra.

It is among the more important sacred places of pilgrimage for Hindus being the scene of the epic battle sung of in the Gita. Several Sikh Gurus visited Kurukshetra, especially on the occasion of solar eclipses which attract vast crowds of Hindus, holy men, scholars and lay devotees, who throng to have a dip in the sprawling sacred tank. Guru Nanak Dev took advantage of one such occasion during the early yeas of the sixteenth century by preaching against superstitious rites and rituals. Guru Amar Das, who had made several trips to Kurukshetra as a pilgrim before his conversion to Sikhism, visited the place once at least in 1553. Bhai Jetha, later Guru Ram Das, probably accompanied Guru Amar Das on that visit.

Guru Hargobind visited Kurukshetra on the occasion of solar eclipse fair in 1638. He possibly passed through it earlier during his travel to Nanak Mata and back in 1632-33. Shrines commemorating all these visits were established and later developed into Gurdwaras. They are: 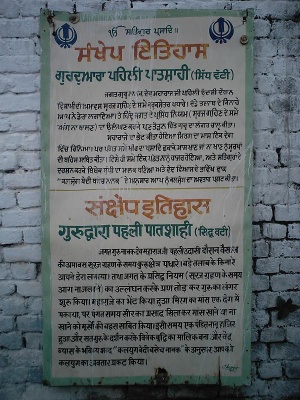