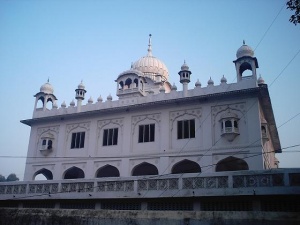 Gurdwara Raj Ghat Patshahi Dasvin is situated in Kurukshetra city near the famour Brahm Sarover (which is a sacred sarovar for the Hindus).

When Guru Gobind Singh came to Kurukshetra on the occasion of the solar eclipse fair in 1702-03, he camped at the place now occupied by this Gurdwara. It was, as it still is, the custom to give rich presents as alms to Brahmans during the eclipse, and receive their benediction in the belief that this would relieve the Sun-god from the clutches of demons eating him away (as the eclipse had been traditionally interpreted), and also earn, for the donors, riches in the hereafter.

Guru Gobind Singh found a novel way of dispelling this misbelief. He loaded a donkey with costly presents and asked the Brahmans to take it as alms. The Brahmans coveted the presents but hesitated to catch the donkey, lest they are polluted by touching the lowly and unholy animal. The sight amused the onlookers who gathered around the Guru. This was what the Guru had desired. He explained to the people the absurdity of relating the eclipses to mythical gods and demons and the futility of giving alms to greedy priests. The Guru was, however, pleased with Mani Ram, one of the Brahmans, who, undeterred by other priest's threats of excommunication, took hold of the donkey as Guru's grace and asked for his blessings. Guru Gobind Singh gave him a hukamnama and a dagger as a relic. 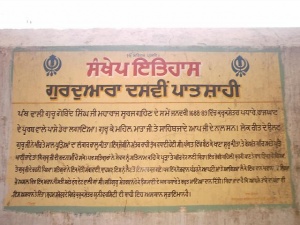