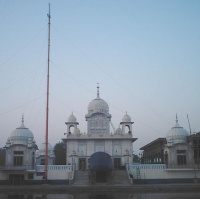 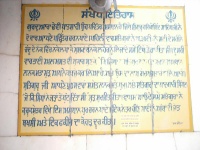 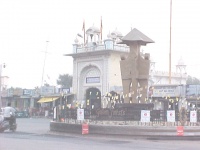 Gurdwara Chhevin Patshahi, dedicated to Guru Har Gobind, is situated between the railway line and the Pehowa road, about 2 kilometres from the Kurukshetra bus stand. The Guru's princely appearance and armed retinue attracted many pilgrims who were puzzled to know that this warlord-appearing person was the spiritual successor of the saintly Baba Nanak. But their doubts were dispelled when they listened to the Guru's discourse on the relation between bhakti and shakti (prayer and power).

Gurdwara Chhevin Patshahi is the premier Gurdwara of Kurukshetra where offices of the local and regional managing committees are located. This is also the most spacious and most magnificent of the local Gurdawaras. Guru ka Langar, sarovar and availability of accommodation for pilgrims is available only at this place. Originally, the shrine was marked only by a platform over which a Gurdwara was raised in 1909. After 1947 a large number of Sikhs, uprooted from Pakistan, found temporary refuge here and later settled in villages in the area, which was, at that time, part of Karnal district.

Baba Jiwan Singh took up the construction and reconstruction of historical Gurdwaras in the region through kar-seva (collective, free and voluntary service). The main building, a high-ceilinged congregation hall on a 6 feet high plinth, with a fluted lotus dome above the sanctum where Guru Granth Sahib is seated on a canopied marble seat, is lined all around, with white and streaked marble slabs. All major functions of the year - birth anniversaries of the first, sixth and the tenth Gurus - are held in this Gurdwara.