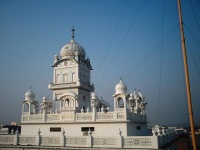 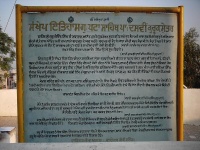 Gurdwara Dasvin Patshahi - is a privately owned shrine in Mohalla Saudagaran in the northwestern part of Thanesar, close to the tomb of the legendary humorist, Shaikh Chilli. It is a small domed Manji Sahib in a house which once belonged to Pandit Moti Ram, who had accepted with humility a donkey, loaded with costly presents, as alms from Guru Gobind Singh. It is claimed that the Guru graced Moti Ram's house with his visit at the Pandit's request and gave him the dagger and the hukamnama here.