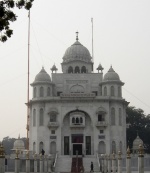 Gurdwara Rakab Ganj Sahib is an important historic Gurdwara in Delhi, India. It’s located at the exact spot where Dhan Sri Guru Tegh Bahadur's headless body was cremated after the Mughal executioner Jalaudin of Samana beheaded the ninth Guru of the Sikhs. Two brave Sikhs of the Guru, Bhai Lakhi Shah Banjara and his son, Bhai Naghaiya rescued the headless body of the revered ninth Sikh Guru from Chandni Chowk, Delhi after the execution of the Guru.

Guru ji's body was rescued by these two with a convoy of several ox-driven carts carrying bales of cotton and foodstuffs. Due to the strong dust storm, these brave Sikhs managed to lift the body of the Guru without the Guards discovering what was going on.

These two Sikhs were able to lift the body with great speed under the cover of the storm and then conceal the body in the cart under bales of cotton. They then quickly moved towards Raisina village, the place where they lived. To avoid any suspicion by the authorities Bhai Lakhi Shah Banjara placed the body on a bed and set fire to his whole house.

This place came to be known as Rakab Ganj. This tragedy took place on November 11, 1675 under orders of the Mughal Emperor Aurangzeb. Another devoted Sikh, Bhai Jaita took the Guru ji's head to Anandpur Sahib, 500Km (300 miles) away from Sis Ganj, Chandni Chowk. .....More