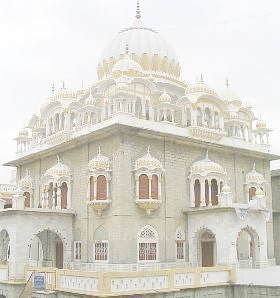 Gurdwara Panja Sahib is situated at Hasan Abdal, 48 km from Rawalpindi in Pakistan. This is one of the most holy places of Sikhism because it marks the spot where the founder of the faith, Guru Nanak Dev visited and instilled an important lesson for his adherents. Still visible is the sacred rock with the hand print of Guru Nanak.

Many thousands of faithful Sikhs from all over the globe visit this shrine. However, twice a year, during special celebrations, an enormous number of Sikh pilgrims attend this Gurdwara from every corner of the world. Special visas are allocated by the Pakistan government to cater for the increased demand.

The word "Panja" in Punjabi means an "outstretched palm" from the word "panj" which means "five".

Guru Nanak along with Bhai Mardana reached Hasan Abdal in Baisakh Samwat 1578 B.K. corresponding to 1521 A.D. in the summer season. Under a shady cool tree, Guru Nanak and Bhai Mardana started reciting kirtan (sacred hymns) and their devotees gathered around. This annoyed Wali Qandhari but he was helpless.

According to legend, Bhai Mardana was sent three times to Wali Qandhari so that he would provide him with some water to quench his thirst. Wali Qandhari refused his request and was rude to him. In spite of this, Mardana still very politely stuck to his demand.

The Wali ironically remarked: "Why don't you ask your Master whom you serve?" Mardana went back to the Guru in a miserable state and said "Oh lord ! I prefer death to thirst but will not approach Wali the egoist again." The Guru replied "Oh Bhai Mardana ! Repeat the Name of God, the Almighty; and drink the water to your heart's content."

The Guru put aside a big stone lying nearby and a pure fountain of water sprang up and began to flow endlessly. Bhai Mardana quenched his thirst and felt grateful to the Guru. On the other hand, at about the same time, the fountain of Wali Qandhari dried up.

On witnessing this, Wali in his rage threw part of a mountain, a huge rock towards the Guru from the top of the hill. The Guru stopped the hurled rock with his hand leaving his hand print in the rock. Observing that miracle, Wali became the Guru's devotee. This holy and revered place is now known as Panja Sahib. 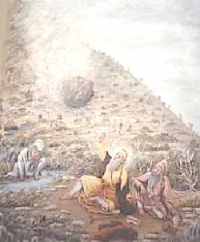 Like all legends and folklore, the story of Panja Sahib sounds like a mixture of beliefs, facts and fiction - fiction to the non-believer, that is. There are variations of detail among different versions of the story that one hears or reads on the Internet. However, a distinct common thread runs through all of them. Other than the Sikh caretaker or Granthi of the shrine I also talked to some locals of Hasan Abdal about the story of Panja Sahib. Every one gave me a similar, if not exactly the same, account; and they all seemed to believe it too. Here is the story in its essential details:

Sometime between the year 1510 and 1520 Guru Nanak is said to have travelled to the Arab lands visiting, among other places, Mecca and Baghdad. Some suggest that he even performed the hajj but there is no conclusive evidence of that. (To give the reader an idea of the time line, it was the time just before Babar's invasion and the rule of the Mughals in India.) On the way back from his sojourn abroad Guru Nanak passed through Kabul and Peshawar and then, after crossing the Indus, halted at a small hamlet at the foot of a steep hill, short of the Margallas, where Hasan Abdal is located today.

Attracted by his teachings, both Muslims and Hindus of the hamlet and the surrounding area started flocking to Guru Nanak. At the top of the hill behind the Guru’s hamlet there lived a ‘pir’ (a Muslim ’saint’ of sorts). He was called Baba Wali Kandhari. His last name referred to his origins in Kandhar, Afghanistan. Other than having a better vantage point from where he could see all that happened in the village below, Baba Kandhari also had the advantage of having a spring of fresh water nearby. The spring was also the only source of water for the people down below. 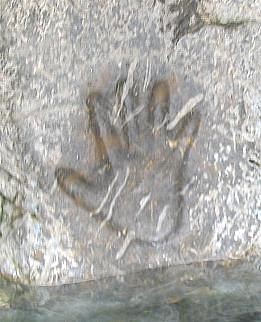 Baba Kandhari could not help noticing the ‘new saint on the block’, as it were. He saw that many more people were flocking to Guru Nanak than were visiting him. He felt a little resentment towards the Guru. What should he do? If he couldn’t stop the flow of people towards the Guru, he thought, he could stop the flow of water to the hamlet below and thus drive the Guru away. And stop the water he did.

Naturally upset over the cutting off of their water supply, a delegation of people from the hamlet went up to Baba Kandhari to request him to be kind enough to let the water flow again. But the Baba angrily sent them back taunting them that why didn’t they ask their Guru to produce water for them.

When Guru Nanak heard this he asked his lifelong disciple and companion, Bhai Mardana (a Muslim), to go to Baba Kandhari and plead with him the case of the village folks. But the Baba did not relent and Bhai Mardana came back empty handed. Guru Nanak sent Bhai Mardana again, and yet again, to beg the Baba for water but to no effect.

Becoming desperate the people turned to Guru Nanak asking him what to do. According to the story, Guru Nanak told them not to despair and trust God and then, pointing to a large stone, asked them to dislodge it from the spot where it was embedded in the ground. When they pushed the stone aside fresh water gushed forth from the ground, enough for the needs of the little hamlet and some more!

Baba Kandhari saw all this from the hilltop and was surprised and dismayed at the same time. But his dismay turned into shock and anger when he discovered that his own spring had meanwhile dried up. Enough was enough, he thought, and decided to do away with the Guru. He pushed a huge boulder down the hill in the direction of the Guru that, he thought, would surely crush the Guru and the people around him.

The boulder rolled down gaining speed and kicking up dirt as it moved. When the people heard the rumble and saw the huge rock hurtling down they panicked and started fleeing. But Guru Nanak stayed calm and continued sitting where he was. When the boulder came close, Guru Nanak calmly raised his right hand as if to order the rock to stop. The boulder pushed against his hand and stopped! 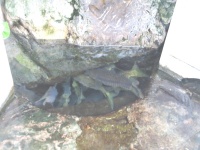 Water flowing from under the stone

The Guru’s open hand got imprinted on the boulder as if pressed into wax. When Baba Kandhari saw this he needed no further proof of the spiritual reach of the Guru. He came down from the hill, touched Guru Nanak’s feet and joined the group of his devotees. The rock with the hand imprint is embedded today in the concrete structure of the Panja Sahib building complex. Clear, fresh spring water gushes out from somewhere behind the rock and spills over into a very large pool. A deep imprint of a right hand is clearly visible on the rock underneath the thin sheet of water flowing over it.

Next to the pool, on an elevated platform, stands a beautiful large gurdwara built in the Mughal style by Maharaja Ranjit Singh (1780-1839). The gurdwara houses the Guru Granth Sahib - the holy book of Sikhs. A large double storied hostel for the yatrees or pilgrims surrounds the courtyard, the pool and the gurdwara. There are numerous plaques and signs announcing the names of the donors and miscellaneous directions in Gurmukhi, English and Urdu.

From the courtyard of the shrine one can easily see the hilltop where Baba Wali Kandhari camped and from where he is supposed have rolled the rock. A modern communication tower sprouts from the place now. The hilltop has also become a shrine named after Baba Kandhari and attracts many devotees from the surrounding area. Even Sikhs pilgrims to Panja Sahib trek up the hill, a distance of over one mile, to visit the shrine. 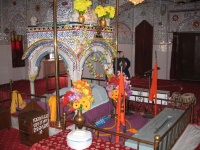 The interior of the Gurdwara at Panja sahib

The Panja Sahib shrine complex is spartan but clean and reasonably well maintained. It could do with a fresh coat paint though, both inside and on the facade. And if I could, I would clear the cluttered street leading from the highway into the town and to the Panja Sahib building.

While visiting the Panja Sahib shrine and hearing the stories one could not help noticing striking similarities between some of the traditions of Sikhs and Muslims. The story of the Guru Nanak divining water reminds one of the story of Hazrat Hajra desperately looking for water for her child in the Arabian Desert and the child kicking up water miraculously from the sand. And, Sikhs are as amazed at the perpetuity and abundance of fresh water gushing forth at their shrine in Hasan Abdal as Muslims are with the perpetuity and abundance of water at Zamzam. Also the Sikhs treat the water at Panja Sahib as reverently as Muslims treat the water from Zamzam. 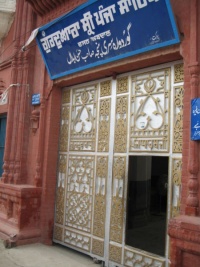 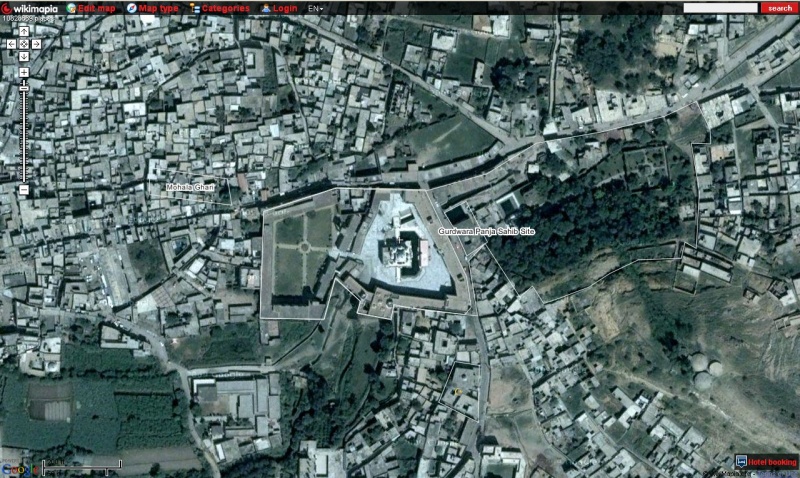