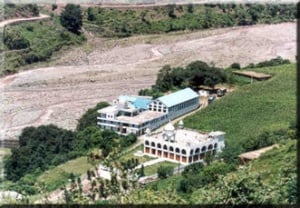 Gurudwara Nangali Sahib is situated in the lap of a picturesque hill and on the bank of Drungali Nallah. It is about 4 kms from Poonch town in Poonch district, which is the smallest of the 14 districts of Jammu & Kashmir State. It is one of the oldest shrines of the Sikhs in Northern India. Presently the Gurudwara complex consists of the main Gurdwara building, a Guru ka Langar free community kitchen and about 70 guest rooms. Large numbers of devotees from varying faiths visit this shrine from all over the country and world yearly.

This holy Sikh shrine is approximately 240km. from Jammu city by road (but only about 150km as the crow flies) which in turn is connected to rest of the world via road, rail and airline network. Pilgrims outside the state may use railways or air services up to Jammu and then travel by road to Poonch.

In 1947, the original building was burned out during the attacks of the Pakistan supported mountain tribals, but with the donations and sewa (service) of the local Sangat (people having faith in the Almighty) the Gurudwara was reconstructed under the supervision of Mahant Bachitar Singh ji. This Gurudwara has remained as a focus of Sikhism in the state of Jammu and Kashmir. An around the clock Langar and serai (rest house facility) is provided to pilgrims regardless of their religion, caste or creed. Although people visit this shrine daily, on Sundays a large congregation (Diwan) is held.

The cool mountain air, which has always attracted people to the area; the vistas of breath taking scenery and the moving spiritual ambiance of this remarkable Gurdwara in this remarkable place makes for a memorable experience for any pilgrim or visitor as they leave with a feeling of great peace and solace of mind.

In addition to observance of daily ceremonies, a special diwan (congregation) is held on every weekend (Sunday). The congregation is attended by a large number of people of Poonch.

A gigantic function is held in the Gurudwara Sahib on the eve of Baisakhi every year. A large number of devotees from Jammu and Kashmir in particular and from around the world in general participate in the day-long function of Baisakhi - the Birth (establishment) day of Khalsa.

Shromani Dera Nangali Sahib Poonch: This Sikh institution was started by Bhai Mela Singh Ji (4th Mahant). Guru Gobind Singh ji presented a Khanda (a double edged sword) and a Bata (bowl) to Bhai Pheru Singh (1st Mahant) and sent him to share Sikhism with the people of Jammu and Kashmir. Bhai Pheru was present on the occasion when Guru Gobind Singh created the Khalsa and was part of that august group which first were called Singhs (Lions). Since then the Gurdwara has been sharing Guru Nanak's message of peace and brotherhood —Sikhi in the hills of Jammu & Kashmir as per the wishes of Guru Sahib ever since.

Currently Mukhi-Sewdar: Bhai Manjit Singh ji, who is 13th in the row, is doing the Seva at this important shrine. Presently the Dera is running several Sikh schools, colleges and professional institutions prominent among those are:

People across the state from all walks of life visit here the whole year. This Gurdwara is revered as 'Shiromini Dera' (the holy place). Sikhi is preached here as per Gurbani.

Dhera Saint Pura Nangali Sahib an important shrine is located in between the Doda range of mountains in the left bank of Durga Nadhi (Drungli) in a very natural atmosphere. Exactly 200 year ago, during the rule of Raja Ru-Ulla-Khan Sangu Gujjar in 1803 AD, a great saint and spiritual personality of his time Thakur Bhai Mehla Singh had established Dhera Sant Pura Nangali Sahib at the very place. In those days this village was known as Boli but with the establishment of Dhera and Guru Dwara the village was renamed by the public as Nangali Sahib after the name of Gurudwara Nangali Sahib.

This historic shrine has played a great role in preaching Sikhism and spreading the thoughts of Khalsa Panth in Jammu and Kashmir. Therefore the Sikh community of the state is having great religious attachment with this holy Dhera. After from a routine visit of Sikh and Hindu devotees, the Sikhs from all corner of state assemble here every year on the eve of Bakashi to pay offerings, obeisance and get blessings from Mahant Ji of the Dhera. After Akhand Path, Shabad Kirtan, sermons from religious personalities, Ardas, Bhog and Langar this religious function take the shape of Mela in which thousands of pilgrims including Hindus and Muslims participates in the Mela and this festival becomes the symbol of composite cultural heritage of this soil. The devotees comes from their native villages and towns in colourful traditional dresses for participation in the function. On this occasion eatable and others shops are establishes in tenteded colonies near the main shrine and indigenous games are played, while Gatka (The war game) is the main attraction of the Mela in which hundreds of Sikh youths come out in religious dresses with naked sword and display their talent.

After the death of Saint Bhai Mangal Singh Ji Doom, his disciple Bhai Bichattar Singh Ji of village Khari Dharamsal succeeded him on 23rd October 1947 AD. During the happenings of 1947 Mahant Ji was compelled to come to Poonch town as village Nangali Sahib had also gone under the occupation of Invaders. After the libration of the village Mahant Ji immediately rushed Nangali Sahib but the original Gurudwara complex was completely burnt and destroyed by the tribeman invaders. Therefore initially he was putting up in a small room near the Dhera. Then he started planning for construction of a big Gurudwara complex and started tours of villages and towns for collection of donations.

Mahant Bichattar Singh was also a great religious personality intellectual and saint. He had purchased 45 kanal land at Digiana, got constructed a big Gurdwara Sant Mela Singh Dastkari Ashram (Digiana) and started Ashram for orphan youths who are being provided training in various trades so that they may be able to earn their livelihood. Ragi Jathas are also organized there for religious preaching.

The present Mahant Shri Manjeet Singh ascended the Gaddi on 10th of Nov. 1991 as desired by Late Mahant Bichatar Singh Ji. His name was confirmed by the Government later on.

He presently heads the Dera and has developed and broadened its influence in various constructive activities. 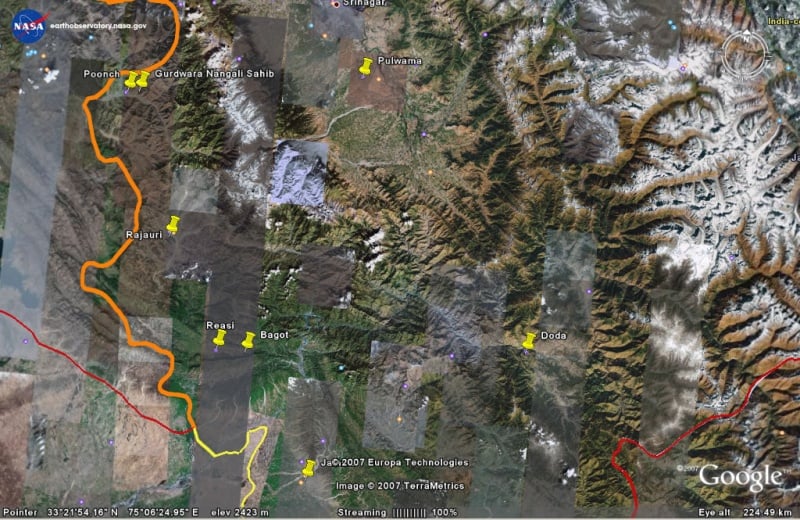