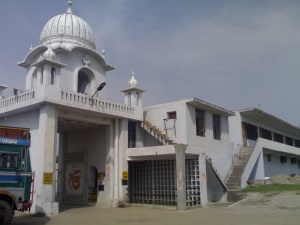 Gurdwara Sant Mela Singh Dastkari Ashram, situated at Digiana Jammu, was constructed by Mahant Bachiter Singh, the 12th Mahant of Gurudwara Nangali Sahib (Poonch), in memory of Sant Mela Singh ji, the 4th mahant of the Dera. The main motive to establish this Gurudwara was to spread sikhi in Jammu.

A Dasatkari Ashram has been set up here to impart training, in kirtan, path recitations, etc. to sikh youth, children, orphans and poor sikh children. Young Sikhs trained in this Ashram are now doing seva as Granthis and Kirtani Jathas at Gurdwaras all over India.

The success of the Gurdwara's Dasatkari Ashram and its students acomplishments across India has made this Gurdwara a popular destination for local Sikhs as well as visitors to Jammu.

In June 2007 a Gurmat Amrit Sanchar Function was organised here by Mahant Manjit Singh ji, the present Mahant, in which eleven thousand (11000) sikhs were baptised at this one place. The paanch Piaaras were the five Singh Sahibaan of the Five Takhats including the Jethedar of Akaal Takhat, the supreme temporal seat of Sikhism.

This Gurudwara Sahib is associated with Gurdwara Nangali Sahib (Poonch).