From SikhiWiki
(Redirected from Jammu & Kashmir)
Jump to navigationJump to search

Jammu and Kashmir (often abbreviated as Kashmir or J & K, and also known as Indian-administered Kashmir), is the northern most state in India and lies mostly in the Himalayan mountains. Jammu and Kashmir shares a border with Himachal Pradesh to the south, Pakistan to the north and west and the People's Republic of China to the north-east and east.

The total area of the State of Jammu and Kashmir is about 2,22,236 Sq Km, of which 78,114 Sq Km. is under the illegal occupation of Pakistan and 37,555 Sq km. under China. In addition to this, 5,180 Sq. Km. of J&K was illegally ceded to China by Pakistan under the March 1963 Sino-Pak Boundary agreement. The State shares a 221 km international boundary with Pakistan in the Jammu region and 365 km. with China in its Ladakh sector. The line of control (LoC), which divides the Indian and Pakistani parts of the state, is 1001 km long (Jammu-205 kms., Valley-460 kms. and Ladhakh/Siachin area-336 kms.). The border with China is 465 kms. long. Pakistan has annexed the districts of Dianer, Baltistan, Gilgit, Muzaffarabad, Kotii, Mirpur, Poonch and Bagh, which collectively have a population of about 2.5 million (1981 census). The people in the Pakistani part are almost all Muslims. The Chinese held territory is called Aksai Chin (meaning un-inhabited). The population of J&K State was around 5.9 million in the 1981 census. Though, no census was carried out in 1991, it is estimated that the total population of the state increased to 7. 72 million.

The three natural divisions are - Jammu, Kashmir and Ladakh. 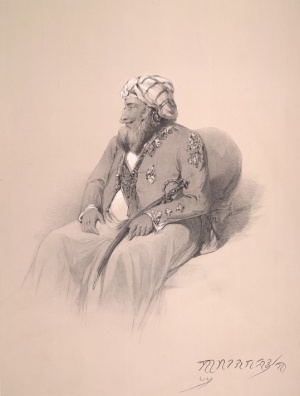 In 1780, Jammu and Kashmir was captured by the Sikhs under Maharaja Ranjit Singh of Lahore and afterwards, until 1846, became a tributary to the Sikh power. Ranjit Deo's grandnephew, Gulab Singh, subsequently sought service at the court of Ranjit Singh, distinguished himself in later wars, and was appointed as the Governor or Raja of Jammu in 1820. With the help of his able officer, Zorawar Singh, Gulab Singh soon captured Ladakh and Baltistan, regions to the east and north-east of Kashmir.

In 1845, the First Anglo-Sikh War broke out, and Gulab Singh contrived to hold himself aloof till the battle of Sobraon (1846), when he appeared as a useful mediator and the trusted advisor of Sir Henry Lawrence. Two treaties were concluded. In the first, the State of Lahore (i.e. West Punjab) was handed over to the British, for an equivalent amount to one crore rupees of indemnity, the hill countries between the Beas River and the Indus River; by the second the British made over to Gulab Singh for 75 lakhs rupees all the hilly or mountainous country situated to the east of the Indus River and west of the Ravi River" (i.e., the Vale of Kashmir).[4] Soon after Gulab Singh's death in 1857, his son, Ranbir Singh, added the emirates of Hunza, Gilgit and Nagar to the kingdom.

Ranbir Singh's grandson Hari Singh had ascended the throne of Kashmir in 1925 and was the reigning monarch at the conclusion of British rule in the subcontinent in 1947.