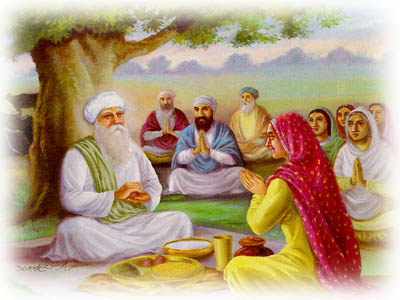 Mata Ganga ji went to seek the blessings of Baba Buddha with a large entourage. She presented Baba Buddha with many delicacies to eat. Baba Buddha refused to provide any blessings. Upon hearing what happened, Guru Arjan Dev told his wife to return this time on foot, with a simple meal prepared by herself. This time Baba Buddha was delighted and partook of the simple food. He prophesied; "A son will be born to you who will crush the enemies of Nanak's house, just as I have crushed this onion with my hand." That prophecy was to soon thereafter come true with the birth of Guru Hargobind in 1595.

When Mata Ganga (d. 1628 AD), sought the blessings of Guru Arjan Dev to bear a child, Guru Sahib advised her to invoke the blessings of Baba Buddha (1506-1631 AD), the most revered Sikh. Going to Baba Buddha, to pay her respects, she carried with her 'missi roti', an onion and lassi. While breaking the onion the Baba pronounced, 'Soon you will be the mother of a child whose gallantry and valor will be unmatched.'

According to Gurbilas Chhevin Patshahi, Gurudwara Bir Baba Budha was the place that Mata Ganga, the consort of Guru Arjan, received from him on 21 Assu 1651 Bk/20 September 1594, the blessing for an illustrious son, the future Guru Har Gobind, Nanak VI.