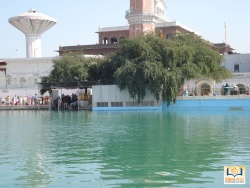 Duni Chand Khatri was a rich landlord of Patti town in Punjab. He had five daughters. All were beautiful and talented. One day huni Chand asked his daughters,"Tell me who provides you meals"? The four older daughters answered that their father was the sustainer and benefactor.

But the younger daughter, Rajni replied, "It is God that sustains all living beings". Hearing this, Duni Chand was enraged and decided to get the youngest daughter married to a leper.

Rajni accepted her father's decision and as a devoted wive, served her husband with dedication and love.

Rajni gets to Amritsar

With faith in her heart, Rajni with her husband decided to go to Amritsar to meet Guru Ram Das Ji under whose guidance the city was being established.

When she reached Amritsar, the devotees of the Guru provided a place for them to stay in. Rajni served in Guru's community kitchen to cook meals. She did this with lot of love, dedication and contemplation of naam, "God's name".

During the working hours of her duty to Guru's kitchen, she made sure that her sick husband was seated comfortably under the shade of a Ber tree that was in the premises not far from waters of the pool or "sarovar".

One day her husband when Rajni was working, he saw two crows dip into the waters of a pool next to the Ber tree. When the crows came out of the waters of the pool, they had changed from black to white colour. He could not believe what he was seeing. A miracle in front of his eyes had taken place! Seeing this, he had an inner calling to take a dip in the waters. 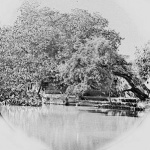 When he came out of the waters he was cured of leprosy. His skin was healthy without any wounds. He was no longer a leper.

In joy and shock at the same time, he sat under the Ber tree.

When Rajni returned from Guru's langar kitchen she started looking for her husband. The man who was sitting under the tree did not look like him. She obviously did not recognise him. She kept on looking left and right to find him. At that moment her husband said in excitement , "It is me, your husband! Look I am cured." It took a while for Rajni to understand what he was saying as she was in a state of shock. Her husband explained what had happened and asked her if they could go to Guru Ram Das ji for blessings.

On hearing this, Guru Ram Das Ji announced to Baba Budha Ji that waters of the pool under the Ber tree were the miraculous as Gum Amar Das Ji had foretold.

The news soon spread and people from far and wide began to visit the blessed waters for cures of ailments. The Ber tree came to be know as Dukh Bhanjani Beri where the Gurudwara was established for people to pay homage in.