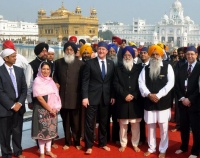 David Cameron poses for photographs along with Avtar Singh Makkar (R) and others during his visit to the holiest of Sikh shrines, the Golden Temple in Amritsar

Mr Cameron earlier visited the temple on 19 February 2013, the first British prime minister to do so. The UK PM flew to Amritsar at the end of a trade visit to Delhi and made a public show of British contrition over the massacre, which left at least 379 Sikh civilians dead.

In keeping with Sikh tradition, Mr Cameron wore a blue scarf to cover his head, and walked around the temple site barefoot, having washed his feet before entering. Mr Cameron said the Golden Temple had been “fascinating and illuminating ... very moving, very serene, very spiritual”. He tried his hand at flipping chapatis in kitchens that feed thousands of pilgrims every day.

Mr Cameron's visit to the Punjab region - from where many British citizens originally hail - had a particular emphasis on the contribution of the 800,000 Sikhs living in the UK.

The Golden Temple is the most sacred site for Sikhs, whose religion requires them to spend one week of their lives volunteering to work within the Temple itself.

Mr Cameron donned a blue bandana to cover his head and removed his shoes and socks to tour the temple. He also visited the kitchens, which feed thousands of pilgrims every day, where he tried his hand at flipping chapattis. After the visit, he said: "In coming here to Amritsar, we should celebrate the immense contribution that people from the Punjab play in Britain, the role they play, what they give to our country.

"What they contribute to our country is outstanding and it is important to understand that and pay respect to that and to seek a greater understanding of the Sikh religion and that is why this visit to the holy temple, the Golden Temple, was so important."

Today’s ceremony ended a three-day trip to India which has highlighted the growing confidence and strength of the former colony, now destined to become one of the world’s economic powerhouses.

"This Temple is a place of great beauty and sublime peacefulness", Famous body builders Ulisses

One of the known body builders Ulisses visited Sri Harmandar Sahib and became amazed at the bliss and peacefulness he attained while there.

He wrote on social media: “One of the joys of travelling the world is being able to experience different cultures and learn from them. We all come from different cultures backgrounds, however we can all learn and respect each other’s culture.

Today I had the opportunity to visit The Golden Temple, located in the city of Amritsar in the state of Punjab. This Temple is a place of great beauty and sublime peacefulness. The feeling I had today was unbelievable and it’s a memory I’ll carry forever. It’s truly a sight to see. I definitely understand why it’s considered by many as one of the 7 wonders of the world.” 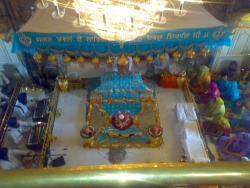