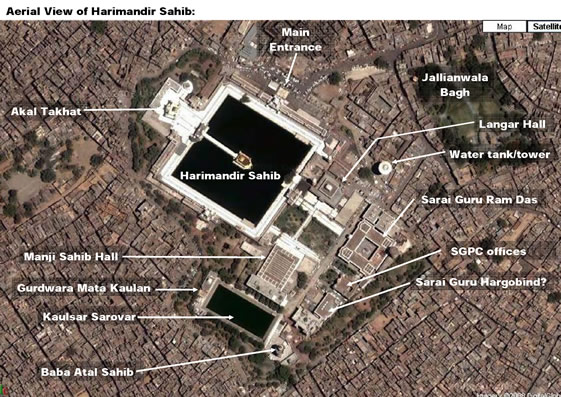 Harimandir Sahib is the most famous Sikh Temple or Gurdwara in the world. It is also called the Golden Temple in English because of the gold plating that covers most of its surface. This Gurdwara is found in the holy city of Amritsar in Punjab in North West India and is the sacred and the most visited of the many historic Sikh shrines found in India and Pakistan. This striking building was built by Guru Arjan Dev, the fifth Guru of the Sikhs.

The Akal Takhat directly faces the Harmandir Sahib. It was built by the sixth Master, Guru Hargobind (1606-44) in 1609. It has been the nerve centre or the Sikhism ever since. All commandments affecting the community as a whole were issued from here by the Gurus.

The Akal Takhat was pulled down several times by the various raiders. The ground floor of the present building was constructed in 1874. Three storeys were subsequently added by Maharaja Ranjit Singh. A number of weapons used by Guru Hargobind, Guru Gobind Singh and other Sikh heroes are preserved at the Akal Takhat. In 1984 during Operation Bluestar, the building was badly damaged by the Indian Army.

A Sikh temple without a community kitchen is inconceivable. Cooked food is serviced in the kitchen of the Harmandir Sahib 24 hours to all visitors irrespective of religion, caste, creed and nationality. The expenses are met out of the Temple funds. At present, approximately 40,000 visitors share the meals everyday in Guru ka Langar.

The Residence Blocks or NIWAS

There are 6 residence blocks or Niwas which provide lodging facilities for pilgrims, maintained by the Sri Darbar Sahib authorities. The reception counters work around the clock to attend to the visitors.

Please Note: The Sarai Booking is offered on First-Come-First-Serve basis subject to availability of accommodation at the time of booking on the desired date/s.

The Niwas is a free hostel for the pilgrims and is maintained by the Temple authorities. It has 228 rooms and 18 big halls spread over 2 stories, with modern sanitation and other amenities for civil life. Unlike the ordinary 'Dhramsalas' the Niwas supplies the facilities of free beddings, cots, lights and fans etc. to the lodgers. A lodger is not generally allowed to stay here for more than three days at a time. The doors of the hostels are open to all. The lodgers however must not do anything repugnant to the teachings of Sikhism.

Sri Guru Nanak Niwas: This building houses sectarian offices of the different departments of SGPC apart from the lodging facilities for pilgrims. The lodging facilities of 66 Rooms - 22 with attached baths and 44 without baths, but on each floor there are 10 independent bath rooms and ten flush latrines so as to make the stay of visitors comfortable.

New Akal Rest House: This building is situated near the rear of Guru Arjan Dev Niwas. It has 49 rooms of which 44 rooms are available for local pilgrims. The remaining 5 rooms are reserved for "foreigners". All rooms have attached bathrooms.

Guru Arjan Dev Niwas: This building is situated at the entrance point to the main sarai area, adjacent to Guru Nanak Niwas. It houses a branch of Punjab & Sind Bank and has parking for scooters. The main booking counter for the rooms is also situated here. The facilities comprises of 100 rooms.

Guru Hargobind Nawas: This building is situated near Gurdwara Baba Atal Sahib. Sri Guru Ramdas Library is situated in its basement. There are 92 double bed rooms with attached bath in addition to four halls. Rooms are available at Rs. 50/- per day.

The headquarters of the Shiromani Gurdwara Parbandhak Committee are located in the Teja Singh Samundri Hall near the Harmandir Sahib. The Gurdwara Act 1925, transferred the control of the historical Sikh Shrines in the Punjab to the SGPC. It is a representative body of the Sikhs elected by adult franchise.

Central Sikh Museum has paintings of Sikh Gurus, Saints, Sikh warriors and other prominent Sikh leaders who have in their own way contributed a lot to the enhancement of the Sikh Religion. 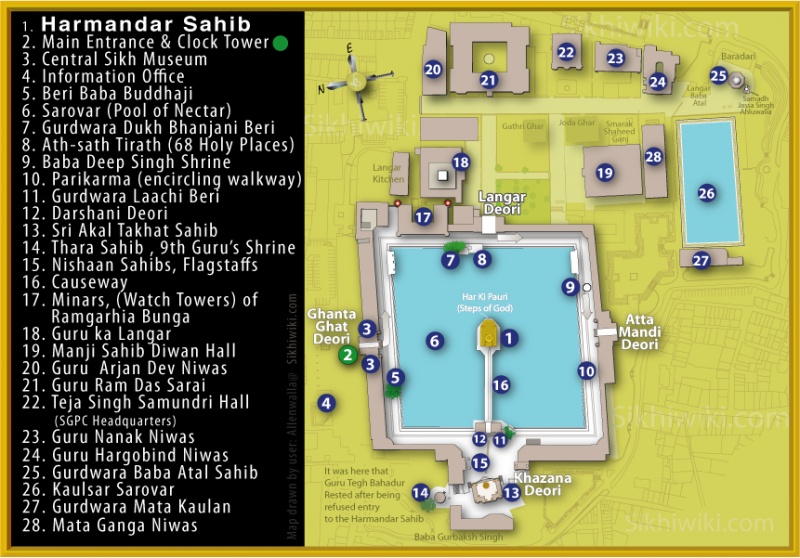