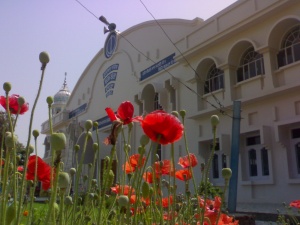 Dodra, a village around 10 km from Budhladha and around 20 KM from Sunam in the Punjab has contributed a lot to the spread of Sikhi. It has a Gurudwara called Brahm Bunga, which was started by a retired army man Jaswant Singh popularly known as "Bauji". The nearest main cities to this village are Sangrur which is about 40kms to the north-east, Barnala about 45Kms to the north and Bathinda which is about 70Kms to the north-west.

Every year, four main samagams (events) are held at Dodra in the months of March, June, September and December. Sangats from all over the world come over during these samagams (events) to take advantage (laha) of these facility. June Samagam is held at Gurdwara Brahm Bunga Sahib, Doraha (District Ludhiana,Punjab). Apart from these main samagams, mini samagams are held at various places all over India every fortnight. At Dodra, kirtan is done by nishkam kirtaniyas and there is no paid employees. Everything is managed by sangat in these samagams and the samagams are free of any politics.

The main feature (USP) of these samagams is the inclusion of Naam Simran which has vanished from our Gurdwaras. In every session of the kirtan, one hour Simran of Waheguru Guru Mantar is done. The Gurdwara is maintained by a Trust called Brahm Bunga Trust. The gurudwara also has a branch at Doraha near Ludhiana.