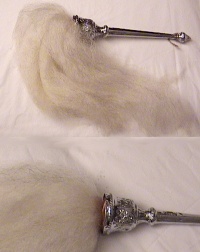 Chaur Sahib is an implement normally found next to the Manji Sahib where the Sri Guru Granth Sahib is placed during the day within the Gurdwara's Darbar Sahib (Main Hall). The Chaur is used to fan the Granth as a sign of reverence and respect for the scriptures. These days, the chaur is usually constructed from yak hair mounted in a wooden or metal handle. The Sevadar (volunteer) respectfully waves the Chaur Sahib above the Guru Sahib as a sign of respect and dedication.

It is regarded as seva (service) of very high calibre for the Guru and most Sikhs at some point undertake this Seva at their local Gurdwara or at their home if they have the Sri Guru Granth Sahib in their home. This seva shows reverence for the message carried by the Guru (Gurbani) and humility (Nimrata) for the word of the Guru. Further, when the Sevadar waves the Chaur Sahib, he or she would silently recite the Gurmantar, Waheguru. So one, not only performs seva but also undertakes Simran at the same time as well. Both Simran and Seva form the foundation of Sikhism – see Sikh Beliefs.

During the time of the first ten Gurus, this tradition was born for various reasons. It was common practise in Punjab for the younger members of the family to perform seva for their elders by waving fans during hot weather condition to create a breeze to cool the person and also to keep flies away from the person. During this earlier period, the chaur was made of peacock feather or wood and canvas and created a good airflow when waved.

This tradition was also used with the Gurus and is now used with the Sri Guru Granth Sahib. It was also a tradition used for kings and royalty. The use of the hair from a yak's tail was one of the royal symbols of Ghengis Khan the distant ancestor of Babur and the Mughals who despite being the rulers of 'Hindustan' long dreamed of retaking their forefather's homelands in the northern stepps. (In this case the grass was actually greener).

These days, with the advent of air conditioning and electric fans, the movement of air is not so important but the "seva" element has taken on a more important and overriding role. The Sikhs treat the Sri Guru Granth Sahib as a "living Guru" and so all the traditions that would be accorded to a "human Guru", of ancient times, are accorded to the SGGS as far as practically possible.

The Chaur Seva is just one of those central traditions that the Sikhs practise to honour their Guru with the high regard and respect that Gurbani deserves. The Sikhs do not 'worship' the Guru Granth for this is forbidden – Only the 'One Almighty God' is to be worshipped, for He is the Creator of everything that can be perceived and also those things that cannot be perceived.

During the time of the first ten Gurus, the congregation (Sangat) and Sevadar (volunteers) who came from afar to see the Gurus wanted to be close to the Gurus and listen to their advice and guidance (Shabad). So they would sit near the Guru and listen to the words of wisdom from the Guru and do Chaur Seva for the Guru. This seva was done turn by turn by many members of the congregation (Sangat) to be as close to their Guru as possible.

Answer: This is to express our regards and our respect for the Holy Scripture, a gift of God. In ancient days the king commanded the greatest power, hence also the maximum respect and honor. Guru Nanak said that the true kings are those who love God and help others to do that. They are the rulers of the hearts of the people. The political kings are temporary kings and their authority ends with their death. For Sikhs the Gurus were often called "The True King"; they taught Truth and the Sri Guru Granth Sahib the Guru of the Sikhs today still guides us in loving our fellow man and the one True God. The Guru Granth Sahib is the embodiment of the spirit of all the Sikh Gurus and many other holy men whose hymns are included in the Holy Granth.

We respect them as true Earthly kings. The Emperors and Rajas of India sat on cushioned thrones under a canopy as a fan like structure was waved over their heads during their darbar both as a symbol of respect and as a powerful message that only the ruler was being fanned as every one else was not afforded the same luxury.

The Sikh Gurus then and today the Guru Granth Sahib, being our true earthly emperor, is provided all the ancient regal paraphernalia in the Gurdwara. We install the scripture on a throne (called Manji Sahib) with pillows around which support it. A canopy (Chanani) is provided above the scripture in the same way as it was put over the head of a king while he attended his court. During the session (Diwan), a person, with Chaur in his hand, is always in attendance on the scripture installed respectfully in the hall. To maintain due regard and respect, we carry this holy scripture to another room when the hall is to be cleaned or when the session is over for the day. Before we bring the Guru Granth Sahib in the hall, we set everything in the hall properly. This is the court of the Guru.

In the ancient darbars the ruler's Gaddi (throne) provided the monarch with a level of comfort not afforded to the courtiers. His throne, often studded with precious stones, gold and silver, was always higher, sometimes even in a loft, as one sees in the Diwan of Dilli's Lal Killa or the one at Fatehpur Sikri's Diwan-i-Khas. The canopy, often of lavish materials protected the ruler from birds and other falling objects or even the sun. On warm days only he was fanned.

You may understand the whole ceremony better if you bring to mind the scene of a modern courtroom where everything is set and made ready before a judge enters his court. The Guru Granth Sahib is, for Sikhs, the Emperor of Emperors, hence the use of all these ancient ceremonial trappings.

A fan made of yak hair, sometimes of peacock feathers, was waved over our living Gurus and so now we continue the practice over the Granth Sahib Ji, designating the Royal Authority invested in it by Guru Gobind Singh ji. No one in the Gurdwara is seated above the SGGS, at the Harmandir Sahib there is and opening on the second floor in the Shish Mahall area so that no one may stand or walk above the SGGS.