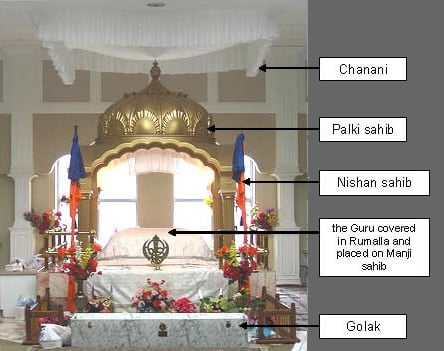 Chanani and other features of the Guru's throne. (click to enlarge)

The Chanani is a canopy, normally made of highly decorated cloth, which covers the SGGS when it is installed in a Gurdwara. It is usually attached high above the Guru's seat, secured to the ceiling or mounted on four posts.

When in transit from its seat in the Gurdwara to its place of repose a palki with an attached Chanani is used. The covering is representative of the high respect afforded the Guru Granth Sahib and is used in the same way it was used in the Days of the living 10 Nanaks, in the Guru's Darbar.