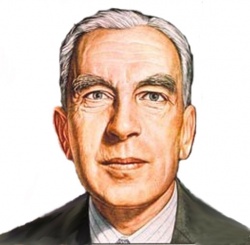 Arnold Joseph Toynbee (April 14, 1889 – October 22, 1975) was a British historian whose twelve-volume analysis of the rise and fall of civilizations, A Study of History, 1934-1961, was a synthesis of world history, a metahistory based on universal rhythms of rise, flowering and decline, which examined history from a global perspective. His work includes over 50 titles on various aspects of world history.

Born in London, Arnold J. was educated at Winchester College and Balliol College, Oxford. He began his teaching career as a fellow of Balliol College in 1912, and thereafter held positions at King's College London (as Professor of Modern Greek and Byzantine History), the London School of Economics and the Royal Institute of International Affairs (RIIA) in Chatham House. He was Director of Studies at the RIIA between 1929 and 1956.

He worked for the Political Intelligence Department of the British Foreign Office during World War I and served as a delegate to the Paris Peace Conference in 1919. With his research assistant, Veronica M. Boulter, who was to become his second wife, he was co-editor of the RIIA's annual Survey of International Affairs. In 1936 Toynbee was received in the Reichskanzlei by Adolf Hitler (cf. Acquaintances). During World War II, he again worked for the Foreign Office and attended the postwar peace talks. 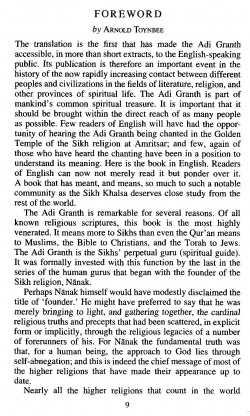 Foreword from the UNESCO publication, "The sacred writings of the Sikhs, Page 9"

Toynbee has given very high and prominent place to the Sri Guru Gobind Singh Ji in Sikh History. He calls Guru Ji a "divinity of highest rank." He gets emotional when he writes about Guru Sahib’s contribution in the formation of Khalsa. Again and again he emphasizes the fact that there cannot be any person like the Sikh Gurus.

When in the late 1950's, Western organizations and U.N.O. began to become acquainted with the message and teachings of the Sri Guru Granth Sahib, they decided to translate the verse from Gurmukhi into English and other languages. They decided to publish a book based on the principles and teachings of Sri Guru Granth Sahib Ji; the book was called "The sacred writings of the Sikhs".

For writing the prologue to this book, they did not find anyone more intelligent, intensive and sensible than Toynbee. Since Toynbee had a deep knowledge of many different societies, religions and principles, this task was assigned to him. No one could write better than him on this subject.

Toynbee in his prologue to this book has clearly mentioned that there cannot be better guide for human beings than the Sri Guru Granth Sahib Ji. This book also explains how Sri Guru Granth Sahib Ji inspires its followers to do their best, give knowledge and deep insight to them in the Name of God, without rituals or ponitless worshipping; God is experienced as an internal and external presence which inspire its followers to a life of service in the name of the true Lord, Sat Nam.

Toynbee has also expressed his view that Guru Gobind Singh Ji’s teachings to the world are the exceptional. According to our great Guru's teaching, there is no need for one to leave one’s home in order to search and look for God. Gurmat teaches us how to live in the world but not to be blinded by it.

According to the holy Granth, true discipline of God is one who exists in this world and yet is aloof of its trappings; it teaches us to work hard and honestly to earn by our efforts and share with others whatever we have. Through the constant remembrance of God, it teaches us not to be a hypocrite, cheat or dishonest at any time.

A true follower of the sacred Granth lives according to the teachings given in Sri Guru Granth Sahib Ji; he sheds all prejudices and personal identity and merges into God. He lives without ego, keeping in mind the welfare of all. Sri Guru Gobind Singh Ji has taught the world the supreme way of true living.

Toynbee also writes about his one personal experience. He recalls one accident when he had met an American lady. She wanted to ask something from him for she knew that he had studied different cultures, traditions, religious and views. So she felt that probably only Toynbee could give her the answer. She asked Toynbee if he could tell her who is the most beautiful person in this World? Toynbee immediately replied, “A man with open beard and a complete Gursikh”. She was surprised to hear his answer. She thought a little and then again asked, “who is the most ugliest person to you” ? Toynbee replied, “Sikh who has cut his hair”. This time she became more surprised. These answers grew curiosity in her about Sikh religion and she decided to gain more knowledge about it.

"The Sacred Writings of the Sikhs" by UNESCO 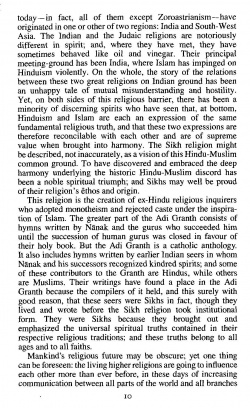 Foreword from the UNESCO publication, "The sacred writings of the Sikhs Page 10"

Below is the main message relating to Sikhs from the foreword written by this historian in the above publication in about 1960:

"Mankind’s religious future may be obscure; yet one thing can be foreseen. The living higher religions are going to influence each other more than ever before, in the days of increasing communications between all parts of the world and branches of human race. In this coming religious debate, the Sikh religion and its scriptures, the Guru Granth, will have something special of value to say to the rest of the world."

"Although the future of religion is bleak but yet one hope is there in the form of Sri Guru Granth Sahib Ji which teaches us all God’s message of love and gives direction to life."

The Foreward in Full

The translation is the first that has made the Adi Granth accessible, in more than short extracts, to the English-speaking public. Its publication is therefore an important event in the history of the now rapidly increasing contact between different peoples and civilizations in the fields of literature, religion, and other provinces of spiritual life.

The Adi Granth is part of mankind's common spiritual treasure. It is important that it should be brought within the direct reach of as many people as possible. Few readers of English will have had the opportunity of hearing the Adi Granth being chanted in the Golden Temple of the Sikh religion at Amritsar; and few, again of those who have heard the chanting have been in a position to understand its meaning. Here is the book in English.

Readers of English can now not merely read it but ponder over it. A book that has meant, and means, so much to such a notable community as the Sikh Khalsa deserves close study from the rest of the world.

The Adi Granth is remarkable for several reasons. Of all known religious scriptures, this book is the most highly venerated. It means more to Sikhs than even the Qur'an means to Muslims, the Bible to Christians, and the Torah to Jews. The Adi Granth is the Sikhs' perpetual gum (spiritual guide). It was formally invested with this function by the last in the series of the human gurus that began with the founder of the Sikh religion, Nanak.

Perhaps Nanak himself would have modestly disclaimed the title of 'founder.' He might have preferred to say that he was merely bringing to light, and gathering together, the cardinal religious truths and precepts that had been scattered, in explicit form or implicitly, through the religious legacies of a number of forerunners of his. For Nanak the fundamental truth was that, for a human being, the approach to God lies through self-abnegation; and this is indeed the chief message of most of the higher religions that have made their appearance up to date.

Nearly all the higher religions that count in the world today—in fact, all of them except Zoroastrianism—have originated in one or other of two regions: India and South-West Asia. The Indian and the Judaic religions are notoriously different in spirit; and, where they have met, they have sometimes behaved like oil and vinegar.

Their principal meeting-ground has been India, where Islam has impinged on Hinduism violently. On the whole, the story of the relations between these two great religions on Indian ground has been an unhappy tale of mutual misunderstanding and hostility. Yet, on both sides of this religious bather, there has been a minority of discerning spirits who have seen that, at bottom, Hinduism and Islam are each an expression of the same fundamental religious truth, and that these two expressions are therefore reconcilable with each other and are of supreme value when brought into harmony.

Foreword from the UNESCO publication, "The sacred writings of the Sikhs, Page 11"

The Sikh religion might be described, not inaccurately, as a vision of this Hindu-Muslim common ground. To have discovered and embraced the deep harmony underlying the historic Hindu-Muslim discord has been a noble spiritual triumph; and Sikhs may well be proud of their religion's ethos and origin.

This religion is the creation of ex-Hindu religious inquirers who adopted monotheism and rejected caste under the inspiration of Islam. The greater part of the Adi Granth consists of hymns written by Nanak and the gurus who succeeded him until the succession of human gurus was closed in favour of their holy book. But the Adi Granth is a catholic anthology.

It also includes hymns written by earlier Indian seers in whom Nanak and his successors recognized kindred spirits; and some of these contributors to the Granth are Hindus, while others are Muslims. Their writings have found a place in the Adi Granth because the compilers of it held, and this surely with good reason, that these seers were Sikhs in fact, though they lived and wrote before the Sikh religion took institutional form.

They were Sikhs because they brought out and emphasized the universal spiritual truths contained in their respective religious traditions; and these truths belong to all ages and to all faiths. Mankind's religious future may be obscure; yet one thing can be foreseen: the living higher religions are going to influence each other more than ever before, in

these days of increasing communication between all parts of the world and all branches of the human race. In this coming religious debate, the Sikh religion, and its scriptures the Adi Granth, will have something of special value to say to the rest of the world. This religion is itself a monument of creative spiritual intercourse between two traditional religions whose relations have otherwise not been happy. This is a good augury.