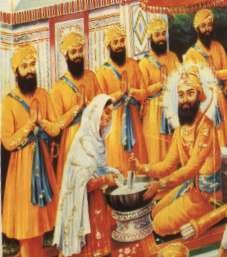 Every year in April, the whole of Punjab in northern India had been celebrating the New year on Vaisakhi day with great fanfare and wild fairs and festivities. This was the main Sikh festivals and traditionally it was the end of the wheat harvest. But in 1699, this festival became extra special because it was chosen by Guru Gobind Singh as the day to start the Khalsa fellowship. On April 13th in most Sikh Gurdwaras a special ceremony takes place as a reminder of this special first Amrit Ceremony.

This first Amrit Ceremony took place in India on April 13, 1699 when Guru Gobind Singh asked a gathering of Sikhs who was prepared to die for God. At first there was a hesitation then one man stepped forward...The Guru and he went together into the tent. Then, Guru Gobind Singh reappeared on his own with blood dripping from his sword. He asked again, and again, again and again. Four brave Sikhs answered the Guru's call for a head. The Guru took the fifth man into the tent and then there was a delay.

Then as everyone was getting very concerned, the Guru reappeared with all five men, alive, well and dressed like him. These five men became known as Panj Pyares or "Beloved Five". They were initiated into the "Khalsa" or community of Sikhs by receiving Amrit...a mixture of sugar and water. Sikh men were then given the added name "Singh" meaning "lion" and ladies received the extra name "Kaur" meaning "princess".

These days on the morning of the ceremony everyone take a bath, wears the five Ks and attends a ceremony of promises when the members of the community renew their promises to God. The five Sikhs that are performing the ceremony prepare the amrit. When the water and sugar has been mixed all of the five Sikhs stir it with a double edged sword while sacred Shabads or hymns from the Sikh holy books are being sung.

New members who wish to become initiated come before the five Sikhs or Panj Pyares that are performing the ceremony. Amrit is sprinkled on their eyes and hair, and they are asked to say "Waheguru" several times. Finally they drink the Amrit mixture. Everyone recites the Mool Mantra and the new members must then wear the five Ks and follow the rules written in the Guru Granth Sahib. Prayers are said, speeches made, reading listened to and finally the whole community will share a meal, the Langar, with everyone present Sikh and non-Sikh.