From SikhiWiki
Jump to navigationJump to search
Amrit Ceremony 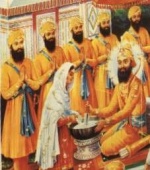 Every year in April, the whole of Punjab in northern India had been celebrating the New year on Vaisakhi day with great fanfare and wild fairs and festivities.

This was the main Sikh festivals and traditionally it was the end of the wheat harvest. But in 1699, this festival became extra special because it was chosen by Guru Gobind Singh as the day to start the Khalsa fellowship.

On April 13th in most Sikh Gurdwaras a special ceremony takes place as a reminder of this special first Amrit Ceremony.

This first Amrit Ceremony took place in India on April 13, 1699 when Guru Gobind Singh asked a gathering of Sikhs who was prepared to die for God or Waheguru. At first there was a hesitation then one man stepped forward...The Guru and he went together into the tent. Then, Guru Gobind Singh reappeared on his own with blood dripping from his sword. He asked again, and again, again and again. Four brave Sikhs answered the Guru's call for a head. The Guru took the fifth man into the tent and then there was a delay. .....More