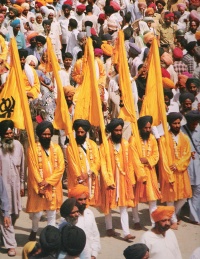 Panj Piare (literally means the "five beloved ones") and is the name given to the five Sikhs, Bhai Daya Singh, Bhai Dharam Singh, Bhai Himmat Singh, Bhai Mukham Singh and Bhai Sahib Singh, who were so designated by Guru Gobind Singh at the historic divan at Anandpur Sahib on 30 March 1699 (now celebrated on April 14) and who formed the nucleus of the Khalsa as the first batch to receive at his hands khanda di Pahul, i.e. rites of the two-edged sword. Today, the term is used to refer to the five who perform this same rites of baptism for the Khalsa panth.

In Sikh theology, as in the Indian classical tradition generally, panj or panch, the numeral five, has a special significance. Guru Nanak in Japji refers to five khands, i.e. stages or steps in spiritual development, and calls a spiritually awakened person a panch. The ancient Indian socio-political institution "panchayat" meant a council of five elders. Something like an inner council of five existed even in the time of the earlier Gurus: five Sikhs accompanied Guru Arjan on his last journey to Lahore; the five were each given 100 armed Sikhs to command by his successor, Guru Hargobind; Guru Tegh Bahadur, set out on his journey to Delhi to court execution attended by five Sikhs. .....More