Difference between revisions of "Hukam" 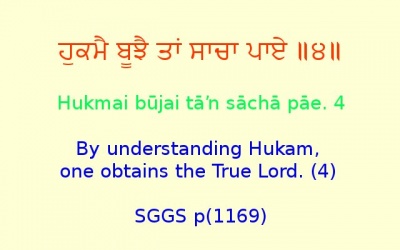 Hukam is a Gurmukhi word derived from the Persian "hukm", meaning command or order. The word is commonly used to refer to the Shabd (hymn) that is read after the Ardas prayer is said in the presence of the Sikh holy scripture, Sri Guru Granth Sahib. This first Shabd that is read is called the Hukamnama or just Hukam.

However, Hukam is also important as a basic concept in Sikhi; the adherents of this faith believe in the "Hukam of the Lord" - Guru Nanak, the founder Guru says, "How can one become pure?; how can the veil of illusion be torn away? O Nanak, Walk according to His Will; it is written in your destiny (1)" (SGGS p 1). So walk your life in his Hukam!

In Sikhism, the word literally means "divine will". A Sikh accepts that everything in the Universe happens according to the Will of an all powerful God, whose is referred to as Waheguru. It is by the command of Waheguru that we are born and we die. In the Sikh Scripture, the founder of the religion, Guru Nanak says:

The whole of the Universe is subject to the Hukam of the Creator God. Nothing ever happens without the Will of Waheguru. This is accepted as one of the primary concepts of Sikhism. For the Sikh, the acceptance of His Hukam is a concept that needs to be learnt and understood. Guru Nanak at the very beginning of the Guru Granth Sahib, the holy scriptures of the Sikhs asks:

And the answer and reply follows on the next line:

Living in harmony with the Divine Will or Hukam brings everlasting peace. This does not imply that a Sikh does not have his or her "Free-Will – All this means is that the Sikh must bring his will in line with the Will of God.

What is God's Hukam? The Sikh Scriptures outline the ways in which one can bring their own thinking in line with the Hukam. Engaging in the service of God's creation is the best way of working in harmony with the Divine Will. Further, by remembering Waheguru one becomes aware of "God's desires" and "Divine essence" within the person is realised. By following these "Divine Values" that benefit His Creation, one ends the cycle of Karma and Transmigration.

Other Meaning:, 'Hukam' also refers to a passage from Guru Granth Sahib, selected by randomly opening the Sikh scripture during a daily ceremony. The passage is considered by Sikhs as the divine "command of the Guru" for the day. Hukam's are taken as guidance in specific situations/answer to questions etc.

The Divine (like the lotus) is in the water; yet untouched by it:

Conception of the Supreme Being

The conception of the Supreme Reality, i.e. God is fixed in Mul Mantra (The Basic Creed) of the Sikh faith, which stands at the head of the Guru Granth Sahib and is considered to be the opening of the holy text of Japuji. Mul Mantra is chanted and written on all solemn occasions when Divine blessing is sought to be invoked in any undertaking. In its original form it reads: Ek Onkar, Satnam, Karta-Purakh, Nirbhau, Nirvair, Akal Murati, Ajuni, Saibhang, Guru Prasadi. Translated into English, this means: The One Supreme Being; Eternal Holy Reality; The Creator; Without Fear; Without Rancour; Timeless Form; Unborn; Self-Existent; Realized Through Divine Grace. The various elements in the above creed on careful study will yield the true significance of the Sikh belief and its idea of God. The first veer-phrase Ek Oankar contains two terms: Ek (One) and Oankar (The Supreme Being). Oankar comes from the Upanishad and is an extended form of Om, which is the holiest of all names of God. In the Guru Granth Sahib Om is also used—once by Guru Nanak and twice by Guru Arjan Dev. Oankar is the Eternal Reality, above gods and goddesses and is holy and self-existent. To it, in order to emphasize the idea of the sole Reality of God, Guru Nanak has added the numeral 1, which in several Indian languages is pronounced as EK. This EK Oankar is the transcendental, unattributed Absolute. In other words, it is that which is above all Existence, has no attributes, since these will limit its absoluteness and Eternity. In Sukhmani (xxiii.6) it is said:

Whenever he wills, He creates the vast universe; As He wills He is again EK Oankar.

Ek Onkar here as elsewhere implies that Reality which is above and beyond all other existence. The next phrase, Satnam contains two terms. Sat (Satya) is both Real and Holy. Naam is a spiritual idea, which stands for the Essence, the Absolute Reality. It is not merely the name as is commonly believed, but that for which the name of God stands, that is, the Divine Essence. Karta Purakh: Karta is Kartar (Creator). The universe is fashioned by God and not by any deity. He is the Kartar, which is one of the commonly emphasized terms for God in Sikh belief. Purakh is the same Purusha (Male, this Mighty Eternal Creator). Purusha has come from the Rig Veda into Indian philosophy, and is one of the holiest words, as implying the Eternal Creator. Nirbhau (without fear) and Nirvair (without rancour) are two negative attributes, implying God’s absoluteness. Not being subject to any other being, and not being subject to need. He is fearless. Since He is the creator of all existence, He is without hate. He is all love, all benevolence. Hence in Sikh teaching, God is referred to again and again as Father, implying His love and care for all creation.

Akal, as said earlier, is Timeless, Eternal. This term is characteristically Sikh. In numerous Sikh phrases this term occurs. Akal is as unmistakably the Sikh name for God, as Allah in the Muslim tradition.

Ajuni implies that God is not subject to birth and death. Hence the Incarnations of God who are worshipped in various religions in India and outside, are not God, for God is unborn. He is not subject to the physical process of having a father and a mother. Related to this is Saibhang. This is a popular form of Sanskrit Swyambhu (Self Existent).

The last phrase, Guru Prasadi implies that God’s knowledge or realization can come to man neither through reasoning or learning nor through ritual performances like pilgrimages, fasting and keeping sacred days. None of the attempts in the ritual practice of religion will help His realization. Through devotion and prayer God’s grace (kindness, mercy) may be aroused and through that alone may He be realized. This is the great mystery of mysteries, which no man can understand. Grace comes mysteriously and in ways unexpected. Only prayer and devotion from the depth of the heart may draw it on man. For grace (prasad) other terms employed by the holy Gurus are mehar (love), karam (bounty), nadar (glance of compassion), daya (compassion), kirpa (kindness). So, this last phrase is essential in the enunciation of the basic idea of the Sikh faith.

In the teaching of Sikhism God is conceived as being without form (nirankar/nirakar). In accordance with this faith, Guru Nanak is known as Nirankari (Believer in the Formless). No image or idol or any figurine can represent God, or be worshipped as God. All existence is God’s visible form, but no part of it is a substitute for God. God is also Nirguna (unattributed) as said earlier. This means that he is not subject to the ‘three qualities’ of ignorance (tamas), passion (rajas), and reasoning intellect (sattva as is all creation or Maya in the different stages of its evolution). God is eternally perfect. Man’s ideal must also be to rise above the three qualities of Maya and enter into the divine state of attributelessness through prayer and devotion. In the state of devotion or bhakti, God is also believed to have certain noble qualities, such as love, compassion, fatherly concern for all creation and the upholding of the moral law in universe. It is through such qualities that He comes close to humanity and becomes ‘the Beloved of His devotees’ (Bhakta vatsala). To love He yields, but no other persuasion.

Man loves Him for the principle of Goodness and Righteousness that is in Him. He is mighty and is constantly intervening in the concerns of the universe by destroying evil. Thus arrogant tyrants such as Ravana, Duryodhana and certain demons in Indian religious history, are destroyed by God’s might operating through certain God-inspired heroes. This belief is also shared by certain other great religions. So, God must be understood to be full of universal love, but also that Might which destroys evil and tyranny. The moral law cannot be defied by man with impunity. Guru Nanak in the hymns on Babar’s invasion points out how the rulers were humiliated at the hands of Babar’s soldiery, which became the instrument of divine justice.

In expressing the idea of God, Guru Nanak and his successors in the holy office of Guruship have employed some other terms which stand for the Absolute Reality. The most commonly used in this respect is Brahm. To give further emphasis to the idea of His transcendental character, this name is used as Par-Brahm (the Brahm beyond human thought). Guru is made to signify the human Preceptor as well as God, from whom all enlightenment and realization proceeds. Guru is also used in the extended compound form as Gurudev—the Lord Enlightened. Satguru (the holy master) is another term used for God. Thakur, Sahib, Swami (all three mean lord, master) are frequently used. From the current Indian phraseology Parmeshwar (the Supreme Lord) is taken. Prabhu (Lord) always stands for God. Often the epithet Sacha (true, holy, eternal) is used as a noun substantive to designate God. Pritam (Beloved), Piyara (Loved One) frequently occur in Gurubani as substantives to designate the idea of God.

Above adapted from article By Gurbachan Singh Talib

The following link will list all the lines in the Guru Granth Sahib with the word 'Hukam' or (Gurmukhi: ਹ੝ਕਮ): ਹ੝ਕਮ