“One who calls himself a Sikh of the True Guru shall get up early morning and meditate on the Lord’s Name. Make effort regularly to cleanse, bathe & dip in the ambrosial pool. Upon Guru’s instructions, chant Har, Har singing which, all misdeeds, sins and pains shall go away.”

Guru Ram Das Ji's spiritual writings are registered in the form of 638 holy hymns, composed to 30 different raags, in the scripture Sri Guru Granth Sahib. These include the Laava, the four hymns read during the Sikh marriage ceremony. Guru Sahib also focused on organizing the structure of the Sikh society, creating and planning the township of Ramdaspur, which subsequently became the Sikh holy city of Sri Amritsar Sahib. Before Guru Ji passed away, they had nominated their youngest son as the next Guru of the Sikhs - Guru Arjan Dev Ji.

The fourth Sikh Guru contributed the following to the people of the world:

Very little is known about the early years of Bhai Jetha who later became the fourth Sikh Guru, Guru Ram Das. Jetha ji was born at Chuna Mandi Bazaar, Lahore at the site of the present shrine on 24 September 1534 where he spent the first seven years of his life. Soon after birth, he was given the name Jetha, meaning the first born.

Jetha's simple and God-fearing parents, Hari Das and Anup Devi of Lahore were delighted at this precious gift from Waheguru. As he was growing up and in his teens, he could always be found in the company of religious men. When he was of 7 Years his father died so her maternal grandmother took him to Basarke, near Amritsar. Jetha continued to become a handsome young man.

Bhai Jehta worked hard in Goindwal in the various construction projects that were taking place. Guru Amar Das was very impressed with the Sewa performed by Bhai Jetha and susequently a marriage was arranged between Bibi Bhani, his daughter Bibi Bhani and his dedicated devotee, Bhai Jehta.

The marriage took place on 18 February 1554. After their marriage, the couple remained in Goindval which was an upcoming Sikh town and carried out voluntary service (Sewa) in the construction of the Baoli Sahib (sacred well), serving the Guru and the congregation (Sangat). 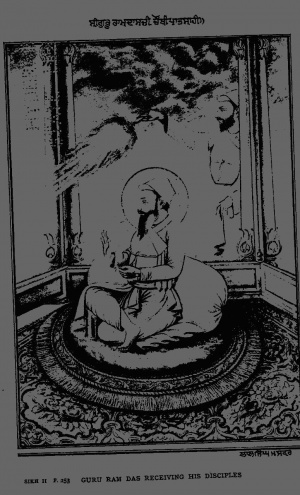 Jetha became a trusted disciple of Guru Amar Das ji. He undertook many sewas and also successfully represented Guru Amar Das ji before the Mughal royal court to defend charges by some jealous Hindus who had taken exception to some of the wording of the Sikh teachings, saying that Sikhism maligned both the Hindu and the Muslim religions. The following is a translation of what Jetha said in the Court of Akbar:

"Birth and caste are of no avail before God. It is ones deeds which make or unmake a man. To exploit ignorant people with superstitions and to call it religion is a sacrilege against God and man. To worship the infinite, formless and absolute God in the form of a totem, an image or an insignificant time-bound object of nature; to lead people to believe that they can wash away their sins, not through compassion and self-surrender, but through ablutions; to insist upon special diets-what to eat and what not to eat; to say that a certain language and dress allows access to God and to condemn masses of human beings, men, women and children, to the status of sub-humans, who are not even allowed to learn to read the scriptures that they are told rule their lives; never allowed to enter a house of worship; who are allowed to do only the lowest degrading work, is to tear man apart from man. This is not religion nor is it religion to deny the world by becoming an ascetic, for it is in the world alone that man can find his spiritual possibilities."

Impressed by the tenets of Sikhism as explained by Bhai Jetha Emperor Akbar dismissed all of the charges.

Eventually Bhai Jetha was ordained as Guru Amar Das's successor and named Guru Ram Das ji. (Ram Das means servant of God). Guru Ram Das ji now eagerly continued the building of the city of Ramdaspur (the abode of Ram Das) by the digging of the second sacred pool as he had been instructed by Guru Amar Das ji. Pilgrims came in ever growing numbers to hear the Guru and to help in the excavation work of the tank. The holy tank would be called Amritsar meaning pool of nectar. Today the city of Ramdaspur, which now is the holiest center of Sikhism has come to be know as Amritsar. Guru Ram Das ji urged his Sikhs that one could fulfill one's life not merely by quiet meditation, but by actively participating in the joys and sorrows of others. This is how one could also rid oneself of the prime malady - Ego, and end their spiritual loneliness.

One of the new entries into the Sikh fold at this time was Bhai Gurdas Bhalla, the son of the younger brother of Guru Amar Das ji. Bhai Gurdas ji was a superb poet and scholar of comparative religion who would later go on to become the scribe of the first edition of the Guru Granth Sahib ji. Guru Amar Das ji was impressed with Bhai Gurdas's existing knowledge of Hindi and Sanskrit and the Hindu scriptures. Following the tradition of sending out Masands across the country Guru Amar Das ji deputed Bhai Gurdas to Agra to spread the gospel of Sikhism.

There are 688 Hymns of Guru Ram Dass included in Guru Granth Sahib which have various teachings for sikhs. Guru Sahib's Bani is also part of Rehras Sahib and Kirtan Sohila which are daily prayers of Sikhs. Page 305 of the Guru Granth Guru Sahib decries the morning activity of one who calls himself a Sikh of the True Guru (God):

One who calls himself a Sikh of the True Guru shall get up early morning and meditate on the Lord's Name. Bathe daily in the ambrosial pool and following the Guru's instructions, chant Har, Har. All sins, misdeeds and negativity shall be erased.

The standard Sikh marriage ceremony known as the Anand Karaj is centered around of , a four stanza hymn composed by Guru Ram Das ji. During the marriage ceremony the couple circumscribe the Guru Granth Sahib ji as each stanza of the Lawan is read. The first round is the Divine consent for commencing the householders life through marriage. The second round states that the union of the couple has been brought about by God. In the third round the couple is described as the most fortunate as they have sung the praises of the Lord in the company of saints. In the fourth round the feeling of the couple that they have obtained their hearts' desire and are being congratulated is described.

Guru Ram Das Sahib composed a beautiful bani called Laavan about the meaning of marriage to a Sikh couple – Effectively, the Guru defines a Sikh marriage in these 2 lines: "They are not said to be husband and wife who merely sit together. Rather they alone are called husband and wife, who have one soul in two bodies."

When the aged son of Guru Nanak Dev ji, Baba Sri Chand, who had chosen to become an ascetic (Baba Sri Chand was the founder the 'Udasis' sect), came to visit Guru Ram Das ji he asked him why he kept such a long beard? Guru Ram Das ji replied; "To wipe the dust off the feet of holy men like yourself" and then he proceeded to perform this supreme act of humility. Seeing this Sri Chand held his hand and embraced Guru Ram Das ji saying; "It's enough. This is the kind of character by which you have deprived me of my ancestral heritage. Now, what more is left with me that I could offer you for your piety and goodness of heart?" (Outraged that his father Guru Nanak had chosen to pass the Guruship to Guru Angad Sri Chand had attempted to install himself as the second Guru of the Sikhs and had hoped to alter the direction of Sikhi that Guru Nanak had chartered.)

Guru Ram Das's first cousin Sahari Mal came to invite the Guru to visit Lahore in connection with the marriage of his son. The Guru being much too busy with his work promised to send one of his sons instead. Guru Ram Das ji asked his eldest son Prithi Chand to attend on his behalf, but he refused. Prithi Chand found a reason to avoid the trip, perhaps, he feared that his father would, in his absence, install his youngest brother, Arjan Dev as the next Guru. Prithi was sure that Arjan was the favorite son of his father. Next the Guru asked his next eldest son Mahadev to attend the wedding, but Mahadev was a recluse and excused himself on the ground that he was not interested in the affairs of the world. The Guru therefore asked his youngest son Arjan Dev to attend, which he agreed to do with such grace and humility, that Guru Ram Das ji was very pleased.

Arjan Dev proceeded to Lahore where, his father had asked him to remain until called for and to take charge of the needs and education of the Sikhs in Lahore, his father's ancestral home. Two years later, feeling intensely homesick, Arjan Dev composed a poem of love and devotion and sent it to Guru Ram Das ji. This poem along with another one, sent a few month's later were intercepted by his elder brother Prithi Chand who made sure his father never received them. Finally Arjan wrote a third poem marking it with the number 3 and gave strict instructions to the messenger to give it to the Guru personally.

Receiving this poem, Guru Ram Das ji seeing the number 3 sensed that there must have been two earlier letters. Aware of the jealousy of his eldest son he confronted Prithi Chand, asking him if he knew anything about previous letters. At first, Prithi Chand denied everything, but seeing the insistence of the Guru and the consequences of his refusal to obey him, he finally confessed his treachery and produced the two earlier letters. (Another story often told has the Guru sending someone to Prithi Chand's quarters who finds the letters in Prithi's clothing.) When Guru Ram Das ji read them, he was moved to tears by the humility and sincerity of his son Arjan's compositions.

Guru Ram Das ji immediately sent for Baba Buddha to journey to Lahore and to bring back his son Arjan Dev with full honours. On his return the Guru declared him his successor. Prithi Chand's deception had resulted in bringing about his fears, he never accepted his father's choice and continued to misbehave and abuse Guru Arjan Dev ji. Eventually Guru Ram Das ji had to publicly condemn his son Prithi Chand for his actions.