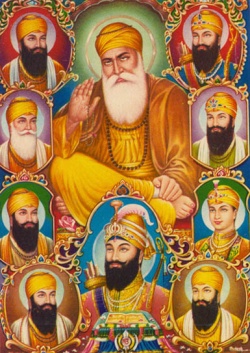 Sikhism was founded in the early fifteenth century by their founder and spiritual teacher called Guru Nanak. He was firmly of the belief that all people were born equal and should have equal opportunities.

Guru means "spiritual leader" and he guided his people in the way of God's will or Hukam believing there was only one universal God and that we were all accountable to Him. There are over 25 million Sikhs worldwide and the religion is open to anyone.

Guru Nanak was born in the village of Talwandi, now called Nankana Sahib, near Lahore in present-day Pakistan. His parents were of Hindu background and he was from a family who were traders.

Even as a boy, Nanak was fascinated by religion, and his desire to explore the mysteries of life eventually led him to leave home and he travelled all over the world in the manner of Indian saints. It was during this period that Nanak met many religious people and preached his message of one God to all the people of Central Asia. He made five distinct major journeys, which are called Udasis spanning many thousands of miles covering most of Central Asia and the Middle-East.

In 1539, Guru Nanak chose Lehna, his disciple as a successor to the Guruship rather than his son. Bhai Lehna was named Guru Angad and became the second guru of the Sikhs. He continued the work started by the founder.

After Guru Nanak there were ten other gurus:

The last of the human gurus, Guru Gobind Singh started a new brotherhood of Sikhs known as the Khalsa or "Pure Ones". He instructed them to wear the five Ks which is a sort of uniform which makes them all recognise each other as members of one community. The Guru passed the Guruship of the Sikhs to their holy scripture called the Guru Granth Sahib ji, which is the perpetual Guru of the Sikhs.