Difference between revisions of "Bibi Bhani" 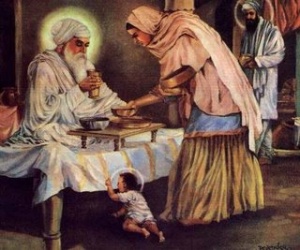 She was born to Mata Mansa Devi on 19 January 1535 (21 Magh 1591 Bk) at Basarke Gillan, a village near Amritsar. She was married on 18 February 1554 to Bhai Jetha (whose name was later changed to Guru Ram Das), a Sodhi Khatri from Lahore. Bhai Jetha later moved to Goindval which was an upcoming Sikh town and carried out voluntary service (Sewa) in the construction of the Baoli Sahib (sacred well).

Guru Amar Das was very impressed with the Sewa performed by Bhai Jetha and so a marriage was arranged between Bibi Bhani, his daughter and a dedicated devotee, Bhai Jehta. After marriage, the couple remained in Goindval serving the Guru and the congregation (Sangat). Later, on the near completion of contruction of the Gurdwara at Goindval, Bhai Jetha was deputed by the Guru to go and establish a habitation at present-day Amritsar. This place was also later caller Ramdasar. Here, on a piece of land gifted, according to one version, by [[]]Emperor Akbar to Bibi Bhani at the time of his visit to Guru Amar Das.

Three sons, Prith Chand (1558), Mahadev (1560) and (Guru) Arjan Dev (1563) were born to her. A popular story mentioned in old chronicles describes how devotedly Bibi Bhani served her father. One morning, it is said, as Guru Amar Das was absorbed in meditation, Bibi Bhani noticed that one of the legs of the low wooden seat on which the Guru sat was about to give way. she at once put forward her hand to support the stool. As the Guru ended his devotions, he discovered how her hand was bleeding from the injury she had sustained. He blessed her saying that her progeny would inherit the guruship. Bibi Bhani died at Goindval on 9 April 1598.

She was a symbol of service. In the Sikh history, she is known as an embodiment of service.

Domestic circumstances never became any obstacles and she kept serving her father humbly and with devotion, even after she became the mother of three sons. She very gladly and regularly kept giving bath to her father and used to keep a watch so that no body disturbed him during his meditation. So much so that when a leg of that bath-stool was broken, she kept her arm underneath it, so that his meditation was not disturbed. Only Bibi Bhani could do that. She was married in the beginning of 1553. She served Bhai Jetha not only as a husband but also as a saint.