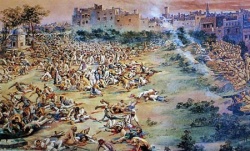 Jallianwala massacre in 1919 in Amritsar, India

Jallianwala Bagh Massacre, involved the killing of hundreds of unarmed, defenceless Indians by a senior British military officer. The incident took place on 13 April 1919 in the heart of Amritsar, the holiest city of the Sikhs, on a day sacred to them called Vaisakhi - the birth anniversary of the Khalsa.

Jallianvala Bagh, a garden belonging to the Jalla, derives its name from the owners of this piece of land in olden times. At the time of this incident, this land belonged to the family of Sardar Himmat Singh Jallevalia (d.1829), a noble in the court of Maharaja Ranjit Singh (1780-1839), who originally came from the village of Jalla, now in Fatehgarh Sahib district of the Punjab.

The family were collectively known as Jallhevale or simply Jallhe or Jalle, although their principal seat later became Alavarpur in Jallandhar district. The site, once a garden or garden house, was in 1919 an uneven and unoccupied space, an irregular quadrangle, indifferently walled, approximately 225 x 180 metres which was used more as a dumping ground rather than a garden.

In the Punjab, during World War I (1914-18), there was considerable unrest particularly among the Sikhs, first on account of the demolition of a boundary wall of Gurdwara Rakab Ganj at New Delhi and later because of the activities and trials of the Ghadrites almost all of whom were Sikhs. .....More